A photo of an emaciated elderly man in a saffron turban has been shared thousands of times in Facebook and Twitter posts that claim that he is on a hunger strike to support ongoing farmers’ protests in India. The claim is misleading; the photo has circulated online for years before the protests began; it shows activist Surat Singh Khalsa who is on hunger strike to demand the release of jailed Sikh activists from Indian prisons.

The photo was published on Facebook here on December 19, 2020.

The post’s Hindi-language caption translates to English as: “Bapu Surat Singh has given up food and water for the farmer community. Now the people will have to keep fasting in the times to come if they still will not unite. Wake up PM, farmers are dying. #farmersrprotest.” 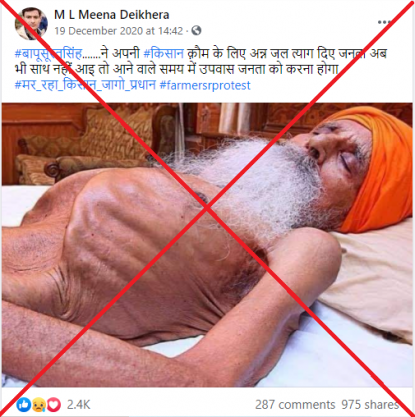 Bapu Surat Singh is a reference to elderly Sikh activist Surat Singh Khala, who has been on hunger strike since January 2015 to demand the release of Sikh prisoners held in Indian jails, as reported here by The Indian Express.

“PM” is a reference to Indian Prime Minister Narendra Modi.

The misleading post was shared as farmers in India continue widespread protests against new agriculture laws introduced by the Modi administration, as AFP reported here.

The image has circulated online since at least 2015, for example here and here in reports about the deteriorating health of Surat Singh Khalsa, who is reportedly on fast-unto-death since January 16, 2015. 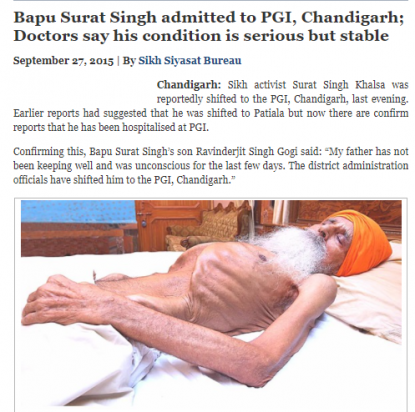 Recent videos of the activist have been posted on his Facebook page, in which he can be seen talking about his demands and being fed through a nasal pipe.

“Your Surat Singh Khalsa has been locked inside a room in the DMC Hospital for about six years for the release of Sikh prisoners who have completed their jail-terms,” he can be heard speaking in Punjabi between the 35 to 52-second mark of this video posted on the Facebook page on December 7, 2020.

The page’s display photo, posted on September 25, 2015, is the same photo used in the misleading post.