An invented list of accolades for President-elect Joe Biden has been shared thousands of times on social media. All of the claims about Biden's accomplishments are false -- a fact acknowledged by some of the posts, which claim inaccurate statements about the Democrat are ignored by fact checkers.

“Joe Biden was a war hero. He rescued his whole regiment and captured 3000 enemy soldiers. He was awarded the Medal of Honor for his bravery. He was a Rhodes Scholar, graduating top of his Harvard Law School class and went on to build a multi million dollar law firm in Boston. He then ran for Congress and was instrumental in creating NASA, the Peace CORP, The Dept. of Homeland Security and passed 11 balanced budgets,” a December 21, 2020 Facebook post reads. 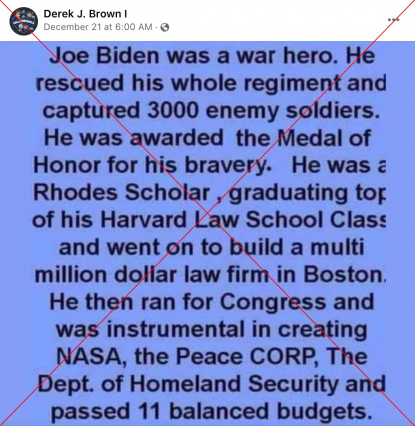 Some posts include a disclaimer: “Of course NONE of this is true. I made it all up, to see if the Facebook ‘fact-checkers’ will flag this as false and misleading, the way they did when I put up ACTUAL THINGS THAT TRUMP ACCOMPLISHED.” 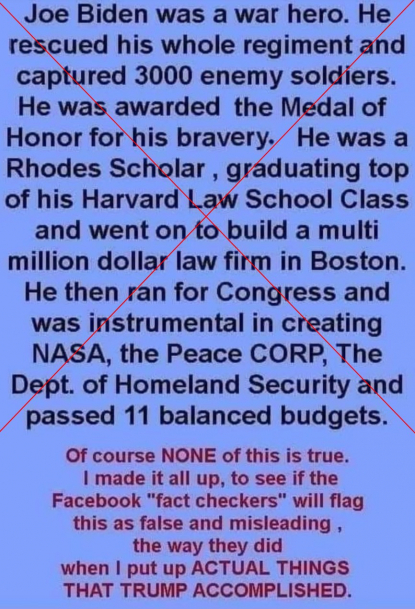 A misleading list about President Donald Trump’s accomplishments circulated earlier this year, and AFP Fact Check debunked it here, though it is unclear if that was what was referred to in the posts.

AFP breaks down the claims about Biden below.

The posts claim Biden was a “war hero” and won the Medal of Honor. This is false; Biden never served in the US military, and received multiple draft deferments.

Medal of Honor recipients are listed in an online database. No results for “Biden” appear.

“He was a Rhodes Scholar, graduating top of his Harvard Law School class and went on to build a multi million dollar law firm in Boston,” posts say.

This is false; Rhodes Scholars are also listed online. Biden is not among them.

And the former vice president earned his law degree at Syracuse University, not Harvard Law, and finished 76th out of 85 in his class, not first.

While Biden did form a law firm, it was in Delaware, not Boston.

The posts claim Biden was “instrumental” in forming the US National Aeronautics and Space Administration (NASA), the Peace Corps and the Department of Homeland Security.

President John F Kennedy, not Biden, created the Peace Corps in 1961 through an executive order.

While Biden was a member of the Senate at that time, he was not a sponsor of the bill, nor is he mentioned in the history page on the DHS website.

This too is false.

Budget data from the Congressional Budget Office (CBO) shows a deficit in all but two of the years Biden was in Congress, so Biden could not have voted for 11 balanced budgets.

The data is available to download from this CBO page under “Historical Budget Data.”