Skip to main content
WASHINGTON, DC - DECEMBER 03: President Donald Trump speaks about the election after presenting the Medal of Freedom to former college football coach Lou Holtz in the Oval Office of the White House on December 3, 2020 in Washington, DC. Holtz is best known for his time as head coach of University of Notre Dame's football team, winning a national championship in the 1988 season. Doug Mills-Pool/Getty Images/AFP (AFP / Pool)

Multiple Facebook posts shared hundreds of times in Myanmar claim Donald Trump “fought back” to “win” the US presidential election in 2020. This claim is false; Joe Biden defeated incumbent US president Donald Trump in the 2020 election; as of December 4, Trump’s legal challenges to prove what he claims were instances of voter fraud in some states have all failed, with officials saying there is no evidence of widespread voter fraud; the misleading posts shared screenshots of a YouTube video that was not produced by a reputable media organisation.

One misleading post, which includes five screenshots, was published here on Facebook on November 28, 2020. It has been shared 216 times. 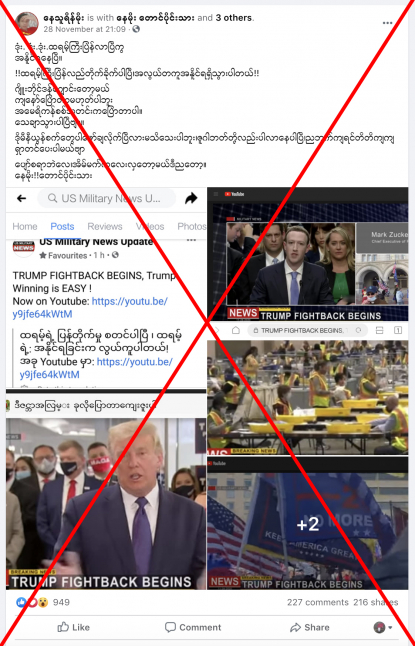 The Burmese-language post translates to English in part as:  "Trump is returning. He wins.

I didn't say it. The American military news reported it.

“It's now sure. Zuckerberg is also jumping in it. I'll write more details tonight."

Joe Biden defeated incumbent president Donald Trump in the US presidential election in November 2020. Biden won the electoral college vote -- the state-by-state competition deciding the winner -- by 306 to 232. In the popular national vote, which does not decide the result but still has political and symbolic heft, Biden won by 51 to 47 percent. Despite the result, Trump has refused to concede.  Here is an AFP report on the election.

A similar claim was published here on Facebook with two of the same screenshots.

The claim is false; Biden won the US presidential election in 2020.

The screenshots in the posts show Trump, Facebook CEO Mark Zuckerberg, US polling station staff and Trump supporters. A keyword search on Facebook found they were taken from this YouTube video on a channel called “US Military News”.

The three-minute 20-second video was also shared on a Facebook page here for US Military News.

US Military News, which has had more than five million views on YouTube since it was created in April 2017, is not a reputable media outlet. The channel is also not currently verified by YouTube, as seen here.

The US Military News video does not specifically say that Trump won the election, but makes a series of statements about Trump challenging the 2020 election result. As of December 4, 2020, none of Trump’s legal challenges have been successful and officials have dismissed allegations of widespread voter fraud. Here is an AFP report on the developments.

It speculates that Trump could challenge Zuckerberg’s donation as part of his effort to overturn the 2020 election result.

Zuckerberg announced here on Facebook on September 1 that he had donated $250million to local election offices.

He later increased his donation, bringing the total to $400million, but as of December 4, 2020 he has not been prosecuted for any offence.