Multiple posts on Facebook and Twitter claim that Pakistani singer Meesha Shafi was sentenced to three years in jail for falsely accusing fellow singer Ali Zafar of sexual harassment. The claim is false; a court is yet to pass judgment in an ongoing defamation lawsuit Zafar filed against Shafi after she accused him of sexual harassment; Shafi and her legal team refuted the claim, calling it “false information” and “fake news”.

The claim has been shared more than 500 times since it was published on Facebook here March 15, 2021. 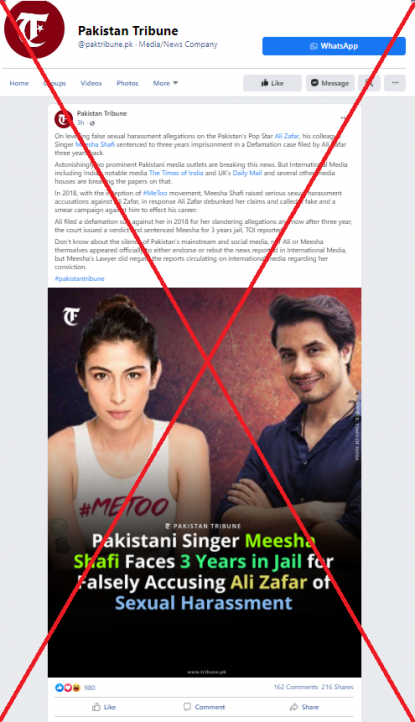 In April 2018, Shafi took to Twitter to publicly accuse Zafar of “sexual harassment of a physical nature.”

Zafar, in return, denied the allegations on Twitter and later filed a defamation case against Shafi, as noted in a media report here.

Meanwhile, after a dismissal from a lower court, the Pakistani Supreme Court agreed to hear Shafi’s cases, as her lawyer Nighat Dad noted on Twitter here on January 11, 2021.

A Google search found that Zafar’s defamation case against Shafi is still ongoing in a court in the Pakistani city of Lahore, as Dawn newspaper reported here. The next hearing is scheduled for March 27, 2021.

The Dawn report reads: “A judicial magistrate on Thursday (March 11, 2021) summoned singer Meesha Shafi and another person in a criminal case registered under the cybercrime law against the singer on the complaint of actor-cum-singer Ali Zafar.

“The magistrate adjourned further hearing till March 27 and issued summons for the appearance of Shafi and Maham Javed. The lawyers of the suspects were directed to come with arguments on the next hearing.”

Shafi and her legal team also refuted the false claim that she was sentenced to three years in jail, calling it “false information” and “fake news.”

Shafi’s tweet was posted as a reply to a tweet from another of her lawyers, Asad Jamal, who posted a statement condemning the false claim.

“It is being incorrectly reported that ‘a Pakistani court has awarded three years of imprisonment to my client Meesha Shaft for causing irreparable damage to Ali Zafar’s career thanks to false allegations’,” the statement reads. “Let there be no confusion that no such verdict has been passed by any court in Pakistan.”