Skip to main content
Members of the transgender community take part in a demonstration to a protest against the killing of a transgender woman in Peshawar on September 14, 2020. - Unidentified gunmen in Pakistan shot and killed a transgender woman in the northwest city of Peshawar, police said last week, in the latest violence to target the community. (Photo by Abdul MAJEED / AFP) (AFP / Abdul Majeed)

A photo of Gul Panra, a popular Pakistani Pashto singer, has been shared multiple times on Facebook and Twitter alongside a claim that Panra was shot dead in the Pakistani city of Peshawar. The claim is false; Panra is alive and well; the posts circulated online after a transgender woman by the same name was murdered in Peshawar.

The claim and photo were published on Facebook here on September 10, 2020. 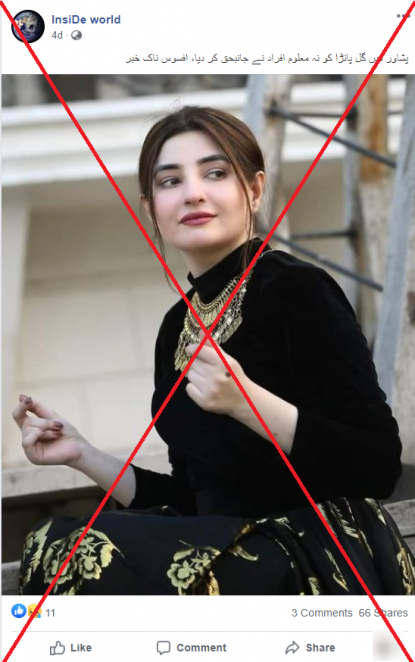 The same photo of Gul Panra was also posted alongside similar claims on Facebook here and here, and on Twitter here, here and here.

“I am alive and well by the grace of Allah,” Panra told AFP by phone on September 15, 2020. “Just for getting likes and shares, people are posting my photos with unrelated news on social media, which is sad.”

The photo being shared in the false social media posts was taken from Panra’s official Instagram account here.

Below is a screenshot comparison of the photo in the misleading post (L) and Panra’s original post on Instagram(R): 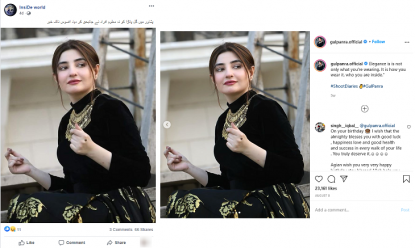 False claims about Panra’s death circulated a day after a transgender woman also named Gul Panra was killed in Peshawar on September 9, 2020, as AFP reported here.

"A group of four transgender (women) were returning home after performing at a wedding function when unidentified gunmen opened fire on their vehicle, killing Gul Panra on the spot," said Hassan Jehangir Wattoo, a senior police official in Peshawar, according to AFP’s report.

On September 14, 2020, local police took to Twitter to announce that “the main suspect in the murder of transgender (woman) Shakeel aka Gul Panra has been arrested.”

The tweet also carries an image featuring a photo of police with the detained suspect and a seperate photo of the victim, who does not resemble the singer Gul Panra. 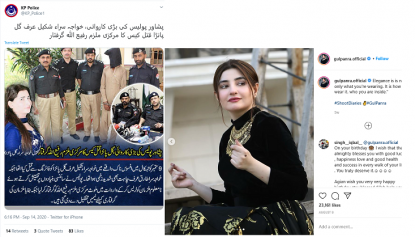