A claim that the Philippines was the second richest country after Japan during the presidency of former dictator Ferdinand Marcos has been shared in multiple posts on Facebook and Twitter. The claim is false; multiple expert analyses of economic data from the era show that economic growth in the Philippines lagged behind several other nations across the region.

The claim was published on Facebook here on March 4, 2020. The post has been shared more than 300 times. 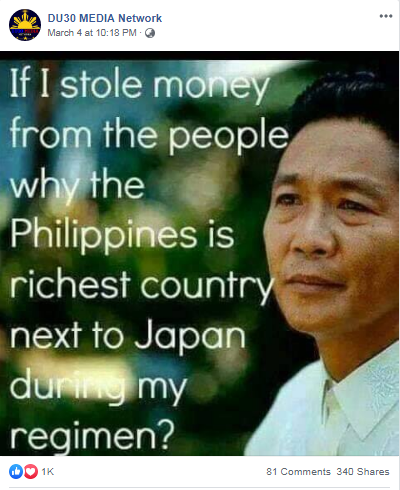 The post features an image of Marcos overlaid with the following text: "If I stole money from the people why the Philippines is richest country next to Japan during my regimen [sic]?"

The late Marcos ruled the Philippines from 1965 until he was deposed in the 1986 “people power” revolution. It is estimated that Marcos siphoned off between US$5 billion and US$10 billion from the country’s coffers during his rule, according to this World Bank report.

Similar claims about the Philippines being the second richest country behind Japan under Marcos were also shared on Facebook here and here, and on Twitter here and here.

The claim is false, experts say.

“The Philippines being ‘second only to Japan’ during the time of Marcos is a patent misrepresentation that can be sustained only by stubborn ignorance or a malicious intent to deceive,” Emmanuel de Dios, a professor at the University of the Philippines School of Economics, told AFP in an email on March 14, 2020.

De Dios analysed the real gross domestic product (GDP) per capita of six Asian countries -- Japan, the Philippines, Sri Lanka, Malaysia, Singapore, and Thailand -- from 1950 to 2000 using historical data from the Penn World Tables. He found that the Philippines was never second to Japan.

When Marcos came to power in 1965, the Philippines' GPD was fifth behind Japan, Singapore, Malaysia, and Sri Lanka, according to de Dios. From 1975 to 1985, GDP in Thailand bumped the country down to the sixth spot.

Other economic publications also refute the claim that the Philippines under Marcos was the second richest after Japan.

Professor Hal Hill of the Australian National University found in this 1982 paper that despite strong economic growth in the early 1960s, per capita income in the Philippines had fallen to “about half of Malaysia, one-third of Taiwan and, if current rates are maintained, will be similar to Indonesia by the end of the decade".

This 2002 paper, co-written by Hill and the Philippine Competition Commission chair Arsenio Balisacan, also found that in 1975 -- three years after Marcos declared martial law -- GDP per capita in the Philippines was below Japan, Hong Kong, Singapore, Taiwan, Malaysia, and Korea.

Another analysis of historical GDP per capita data from the World Bank also shows that the Philippines was never second to Japan during the Marcos regime.