Multiple Facebook posts shared tens of thousands of times purport show an accurate comparison between the Philippine government's responses to the 2003 SARS outbreak and the 2020 novel coronavirus pandemic. The posts claim a prompt travel ban in 2003 resulted in zero SARS cases in the country, whereas a delayed ban in 2020 led to the Philippines recording the highest Covid-19 cases in Asia. The claim is false; Philippine government records show no travel ban was implemented in 2003; World Health Organisation (WHO) data shows the Philippines recorded 14 SARS cases that year; several Asian countries have recorded higher numbers of Covid-19 cases than the Philippines as of September 4, 2020. 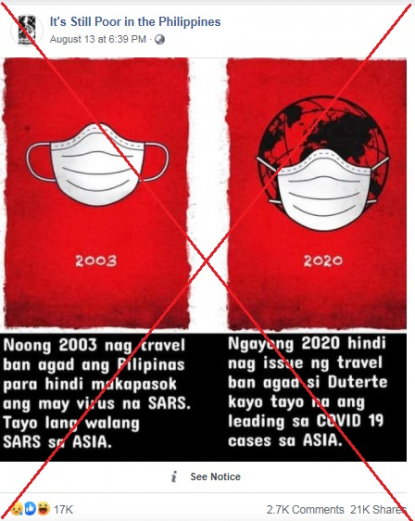 The Tagalog text overlay on the image translates to English as: "In 2003, the Philippines promptly issued a travel ban so those with SARS virus could not enter the country. We were the only country in Asia without SARS.

“Now in 2020, (President Rodrigo) Duterte did not immediately issue a travel ban and that’s why we’re already leading in COVID 19 cases in Asia."

SARS, or severe acute respiratory syndrome, is a viral respiratory disease that was first identified in China in February 2003. According to the WHO, at least 8,098 confirmed cases of SARS were recorded in 26 countries, including 774 deaths.

The image was also shared here, here, here and here on Facebook, alongside a similar claim.

WHO data shows that the Philippines recorded 14 cases and two deaths during the SARS outbreak in 2003.

There is also no record of a travel ban being implemented in the Philippines. This executive order issued by then-President Gloria Macapagal Arroyo on April 26, 2003 instructs “rigid screening” and “strict arrival and departure inspections” but does not mention a ban.

It reads in part: “The Secretary of Health shall exercise such powers necessary and incidental to ensure... Prevention and/or minimization of the entry of imported SARS cases into the country which includes rigid screening and identification of SARS suspects and the institutionalization of a surveillance, alert and quarantine system in all ports of entry;

Below is a screenshot of the relevant sections of the Presidential Order:

Similarly, this WHO report dated May 20, 2003 also states: “WHO has never advised that travel to the Philippines be restricted”.

Covid-19 cases in the Philippines

As of September 4, 2020, this global tally by Johns Hopkins University shows the Philippines has recorded 228,403 confirmed cases and 3,688 deaths caused by the novel coronavirus.

This is not the highest number of Covid-19 cases in Asia. The tally also shows that some seven other countries situated in the Asian continent - India, Iran, Saudi Arabia, Bangladesh, Pakistan, Turkey and Iraq - have recorded a higher number of confirmed cases than Philippines.