Skip to main content
A man walks past a sign on a truck in Melbourne on August 5, 2020, as the city enforces strict lockdown restrictions after a fresh outbreak of the COVID-19 coronavirus. - Australia's worst-hit state of Victoria reported 725 new cases and 15 coronavirus deaths on August 5, including a man in his 30s, making it the country's deadliest day of the pandemic to date. (Photo by William WEST / AFP)

Multiple Facebook posts shared thousands of times claim the Australian government paid nursing homes AUS$25,000 for “labelling [COVID-19] as the main cause of deaths on death certificates”. The posts cite a purported broadcast with an unidentified man on an Australian radio station as evidence for the claim. The claim is false; the local radio station that broadcast the segment with the anonymous caller from the general public said the claim was “immediately recognised as potentially inaccurate information” and was not aired again after the initial live broadcast; in response to the misleading posts, Australia’s Department of Health said the claim was “false” and that only registered doctors can issue death certificates.

“A guy came on, based in metro Melbourne, says he’s totally respecting all the lockdowns rules. However he has a friend who’s [sic] dad just died at 79 years old. A Greek guy, it’s been in the news.

“The dad was in hospital for 2 weeks for late stage terminal cancer. After that he was placed back into the nursing home.

“He died the next day in the nursing home. His death was labeled as covid.

“The family were upset & asked why did they put that on the death certificate when that wasn’t true? The nursing home turned around & said don’t you want a payout for the death?

“The Australian govt is handing out $25,000 to all nursing homes who label covid as the main cause of deaths on death certificates.

“Another friend verifies this story. She’s got a friend who’s father in law in Melbourne just died in a nursing home.” 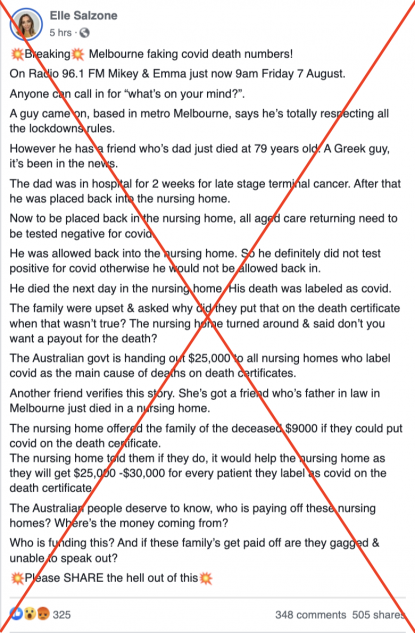 The Mike E & Emma show is broadcast on Sydney-based radio station The Edge between 6am to 9am on weekdays.

The post did not provide details of the name or location of the purported care home or the name of the man who allegedly died.

A spokesperson for The Edge told AFP that the information in the misleading posts relates to a segment conducted by its breakfast show hosts Mike E Etheridge and Emma Lisbona with a caller on August 7.

The station said it decided not to re-broadcast or share the segment that included an anonymous caller from the general public on its social media platforms after the initial live broadcast because the claims made by the caller contained “potentially inaccurate information”.

“During the two minute call, the hosts of the Breakfast program were clearly surprised by the information that the caller provided, and were openly skeptical about its veracity. One host referred to it as sounding like a conspiracy theory, also adding that he wouldn’t take the caller’s word on it,” the spokesperson said in an email on August 11, 2020.

“Given the considerable public interest in COVID-19, The Edge is very careful to ensure that it does not generate, disseminate or promote any false information regarding COVID-19 or government policy regarding COVID-19. In the case of this caller on August 7th, the information was immediately recognized as potentially inaccurate information and was not further distributed beyond the live broadcast so was not repeated on the station’s online, podcast or social media assets.”

In response to the misleading post, an Australian Department of Health spokesperson told AFP via email on August 7, 2020: “The comments made in the Facebook post are false.”

“Australians are encouraged to rely on reputable and authoritative sources of information to help them make informed choices and stay up to date,” the spokesperson added.

The misleading posts imply that nursing homes in the city of Melbourne, situated in the Australian state of Victoria, can issue death certificates in the event of a resident’s death.

But this briefing note on the state’s Department of Health & Human Services website explains that in Victoria, only a registered medical practitioner can certify a death or complete a Medical Certificate of Cause of Death (MCCD).

“The legislative requirement for a registered medical practitioner to ‘certify death’ (a MCCD) under section 37 of the Births Deaths and Marriages Registration Act 1996 remains unchanged,” the briefing note reads.

Whilst the misleading posts did not contain the name of specific care home or the man who allegedly died, a keyword search on Google found some of the details in the posts corresponded with this report published by Australian broadcaster ABC on July 29, 2020.

The report refers to the death of 79-year-old Apostolis Barbousas, an Australian man of Greek descent, at a care home in Melbourne after he contracted COVID-19. The report makes no mention of Barbousas suffering from terminal cancer before his death.

This article was updated on August 13, 2020 to clarify that the misleading claims were made during a radio segment that included a call with an anonymous caller.