Skip to main content
A woman (2nd, L) wears a protective facemask, amid fears over the spread of the COVID-19 coronavirus, in Kuala Lumpur on February 13, 2020. (AFP / Mohd Rasfan)

A claim has been shared tens of thousands of times on Facebook that Malaysia has started distributing monthly compensation of 8,000 Thai baht (245 USD) to its citizens and has waived their electricity bills as part of a six-month relief package during the novel coronavirus crisis. The claim is misleading; as of April 2020, Malaysia’s coronavirus relief measures provided one-off payments as part of a means-tested financial assistance package; the measures included subsidised electricity bills for six months but did not waive them altogether.

The post’s Thai-language text graphic translates to English as: “Malaysia gives money to everyone to combat COVID-19 at 8,000 baht [245 USD] for 6 months. They already got it. No need to pay for the electricity bills for 6 months. What about Thailand? Very selective for 5,000 baht [153 USD]?”

The posts circulated after the Thai government announced that eligible workers can apply to receive 5,000 baht from a government COVID-19 relief package. Todsaphon Kritwongwiman, Secretary-General of the Social Security Office, detailed the aid in this statement broadcasted by ThaiPBS, Thailand’s national broadcaster.

The claim is misleading. On March 27, 2020, the Malaysian government unveiled measures in the form of the Prihatin Rakyat Economic Stimulus Package in a bid to boost the economy during the novel coronavirus pandemic.

According to a Ministry of Finance document, the government said it would provide financial assistance to lower income households. An estimated nine million people in Malaysia, out of a population of 31.6 million, were expected to receive the cash aid, the ministry said.

The one-off payments were capped at 1,600 Malaysian ringgit (12,000 Thai baht or 370USD) for almost four million households earning less than 4,000 Malaysian ringgit per month, as stated in this report published by Malaysian news site The Edge Markets on March 28, 2020.

The Star, an English-language newspaper in Malaysia, reported on April 6 that eligible households and individuals had started to receive assistance that week.

Below is a screenshot of The Star’s article: 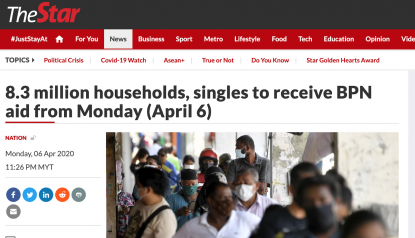 Screenshot of The Star’s article

The Ministry of Finance document also notes that discounts would be given on electricity bills, but it does not state the fees would be waived entirely.

Tenaga Nasional Berhad, Malaysia’s only electricity provider, said in a statement that electricity bills would be subsidised during the crisis.

Below is a screenshot of the Tenaga Nasional Berhad’s announcement: