Skip to main content
Supporters of presidential candidate and Davao Mayor Rodrigo Duterte cheer during an election campaign rally ahead of the presidential and vice presidential elections in Manila on May 7, 2016. (AFP / Mohd Rasfan)

An image purportedly showing screenshots from a TV news report has surfaced on Facebook alongside a claim it shows “evidence of cheating” in the 2016 Philippine vice presidential race, which Ferdinand “Bongbong” Marcos Jr. narrowly lost to Leni Robredo. The image appears to show that Marcos had 33 million votes but dubiously lost his large lead over Robredo. The claim is false: the image is doctored and Marcos in fact secured 14 million votes in 2016.

“EVIDENCE OF CHEATING. Screen shot from actual video reports (sic),” reads the caption on a Facebook post from February 20, 2021.

The post purports to show two screenshots of vice presidential race tallies that aired on local television channel News5 on May 10, 2016, one day after the election. 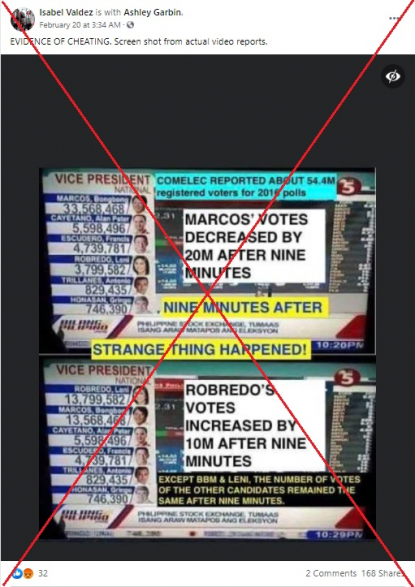 A screenshot of the misleading post, taken on March 5, 2021

In the first screenshot supposedly broadcast at 10:20 pm, Philippine vice presidential hopeful Ferdinand “Bongbong” Marcos Jr. is shown having more than 33 million votes. However, in a later screenshot from 10:29pm, his vote count appears to have dwindled to 13 million.

The post emerged after the Philippines’ top court dismissed an election protest by Marcos, the son and namesake of the country's former dictator, whose defeat in the 2016 poll was a setback for his clan's political revival, as reported by AFP.

Bongbong had accused his rival candidate Leni Robredo of electoral fraud after she narrowly defeated him. However, a recount in tightly contested areas gave her a bigger lead.

An identical image was also shared alongside a similar claim in Facebook posts here, here, here and here.

However, the claim is false. The first screenshot from the image appears to be doctored to show more votes for Marcos as well as an earlier time of broadcast. He in fact only secured 14 million votes in the election, not 33 million.

Both screenshots in the misleading posts are taken from a single frame in a genuine News5 broadcast that aired on May 10, 2016.

However, the first screenshot has been altered to add Marcos’s supposed 20-million vote lead over Robredo.

AFP obtained footage of the genuine broadcast from News5, which shows that no vote tally was broadcast at 10:20 pm, the time at which Marcos’s supposed 33-million vote count displayed on screen. The channel in fact broadcast the beginning of a newscast at that time.

Below is a set of screenshot comparisons showing the screenshots in the misleading posts (L) and their corresponding frames in the actual newscast (R): 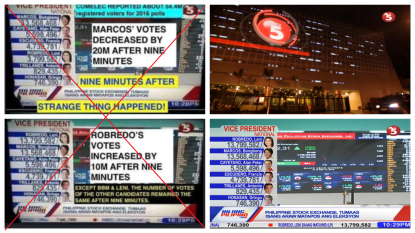 He pointed out that while the tallies in the purported screengrabs appear to change in a span of nine minutes, the background did not and still shows the same stock market report from 10:20pm to 10:29pm.

Lingao explained: “It’s not possible on TV to show the same stock market report for nine minutes because if so, the audience would have fallen asleep or changed the channel.”

Moreover, Marcos did not secure 33 million votes in 2016 as the misleading posts allege.

A Supreme Court document in 2019, accessible here on its electronic library, states Marcos received a little over 14 million votes.

“After the canvassing of results, Congress, sitting as the National Board of Canvassers (NBOC), proclaimed (Robredo) as the duly-elected Vice President of the Republic of the Philippines on May 30, 2016.”

A screenshot of a portion of the Supreme Court resolution, taken on March 5, 2021