Skip to main content
South Korean war veterans salute during a ceremony marking the 68th anniversary of the outbreak of the Korean War in Seoul on June 25, 2018. - The 1950-53 Korean War ended in an armistice with no peace treaty. (AFP / Jung Yeon-je)

A chart circulated in multiple Facebook posts purports to show Korean War veterans in South Korea receive lower government benefits than a group of South Korean pro-democracy demonstrators who protested against the military junta in 1980. But the posts present the data in a misleading way: the South Korean government assesses benefits for members of the two groups based on the injury level of the claimant.

“Treatment comparison chart, where is the standard…,” reads the Korean-language post shared alongside the chart. 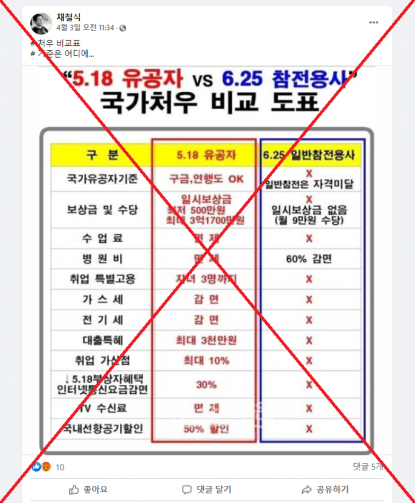 Screenshot of the misleading chart. Captured on April 12, 2021.

"5.18" refers to the May 18 Democratization Movement of 1980, when demonstrators in the South Korean city of Gwangju protested against martial law imposed by the military junta. A military crackdown by the dictatorship ensued, leaving hundreds dead, as stated in this AFP report.

An English translation of the chart by AFP can be seen below: 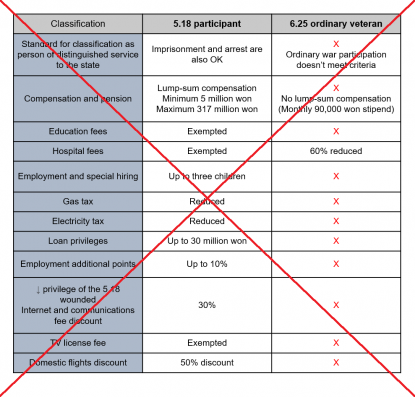 The misleading chart translated into English by AFP. Created on April 14, 2021.

The chart purports to show that non-wounded Korean War veterans receive fewer benefits than May 18 participants.

It also claims non-wounded Korean War veterans are not classified as “persons of distinguished service", but a May 18 participant would qualify for this title even if they had been imprisoned or arrested during the 1980 crackdown.

The chart, however, is misleading.

The law can be read in full here on South Korea’s official legislation website.

An English translation of the law, produced by the government-run Korea Legislation Research Institute, can be read here.

It is used here in a press release from the Anti-Corruption & Civil Rights Commission that was issued on September 9, 2019.

In response to AFP’s inquiry about the chart circulating on Facebook, the MPVA provided its own chart to show how it calculates compensation to members of the two groups.

AFP translated the MPVA chart into English and simplified it below. 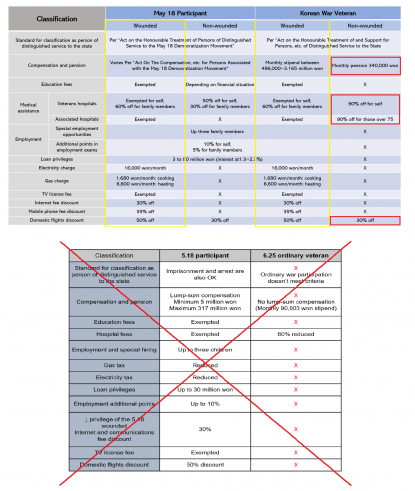 In the first table, the highlighted yellow columns show both wounded Korean War veterans and May 18 participants are covered for most government benefits on comparable terms.

The MPVA lists benefits available to Korean War veterans and May 18 recipients on its website here and here, respectively. War veterans who were wounded, as well as the families of the fallen, are eligible for a different set of benefits that are listed here.