Skip to main content
A golden sun sets near the Shwedagon temple as hyperfocal camera lens flare circles the massive stupa dominating Yangon's skyline, 08 April 2002, Myanmar's capital. For Burmese Buddhists, Shwedagon is the most sacred of all Buddhist sites in the country, one which all Burmese hope to visit at least once. The compound, made up of dozens of golden domes and religious monuments, has seen its share of turbulent times, surviving through fires, earthquakes, occupation by British troops in the 1800s and political activity during the Burmese independence movement. (AFP / Stephen Shaver)

Facebook posts make misleading claims about the Sun and rainbows

A photo collage has surfaced on Facebook in South Korea alongside various claims about the Sun’s distance from Earth and the formation of rainbows. Experts told AFP that the posts’ claims were misleading.

“If the Sun is really 150 million kilometres away, then the phenomenon where the Sun sits in front of clouds doesn’t make sense, because clouds can’t be that far away,” the Korean-language caption reads.

“Rainbows indirectly show the existence of a sky dome.” 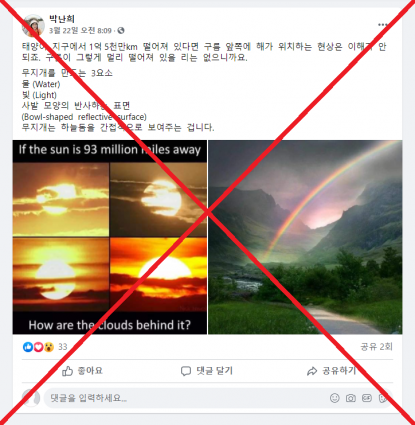 The photos shared in the post purport to show the Sun partially covered by clouds and a rainbow over a valley. The English text superimposed on the image collage of the Sun reads: “If the Sun is 93 million miles away, How are clouds behind it?”

The photos been shared on Facebook alongside a similar claim here, here, here and here.

However, the claims are misleading, experts say.

The figures in the social media posts are approximately correct. The Sun is 149.60 million kilometres (92.92 million miles) away from Earth, according to NASA.

Clouds have been measured at altitudes of up to about 18 kilometres, as seen in this NASA infographic.

The photos that purport to show clouds appearing behind the Sun are the result of an optical illusion, according to Lee Jae-woo, an astronomer and professor at Seoul-based Sejong University.

Contacted by AFP, Lee said that the photos in the Facebook posts “appear to be this way because of a [light] contrast problem, making it seem as though thin clouds sitting in front of a very bright Sun are cut off or sitting behind.”

Lee said such a phenomenon is often caused by a camera, which is typically not capable of capturing brightness to the same level as a human eye.

“If the Sun was really closer to us than clouds, sunlight would spread radially, but because we are so far away from the Sun, rays appear to be parallel to us,” he said during a phone interview on March 29, 2021.

He said rainbows are caused by reflections and refractions of light through surfaces that are not always bowl-shaped, adding that a rainbow appears curved because usually only half of it is visible.

“[The claim that rainbows show] the Earth is flat and that a dome exists on top is false,” he told AFP during a phone interview on March 30, 2021.

“Even in ancient Greece, [people] already knew the Earth was round by comparing the shadows of sticks in different places.”