A Facebook post shared tens of thousands of times purports to show famed British naturalist Sir David Attenborough praising an eco-friendly hotel in Singapore. The post’s caption claims the hotel is “the first to produce its own electricity with the same waste from the same building”. The claim is false; the post is not from a verified Attenborough account and a spokesperson for the hotel pictured in the post said the claim was “not factual”.

The post, which included a photo of a green building, was published here on Facebook on October 15, 2020. It has been shared more than 26,000 times.

The caption reads: “This is an urban forest. An Eco Building in Singapore ?? the first to produce its own electricity with the same waste from the same building ...?” 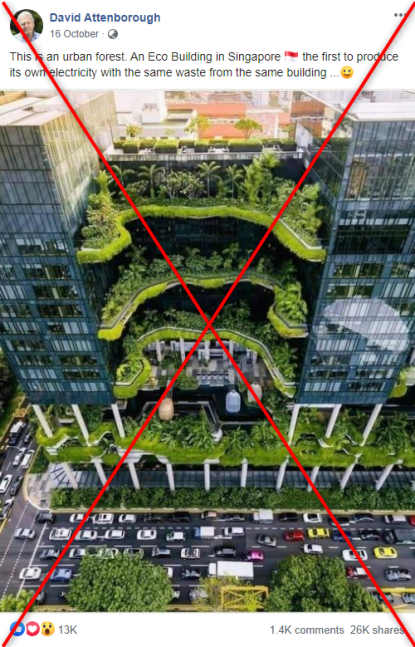 The claim was also repeated in Spanish here on Facebook in 2019.

Further investigation found the page was created on September 25, 2020 by administrators who are based in Bahrain, as shown in the screenshot below. 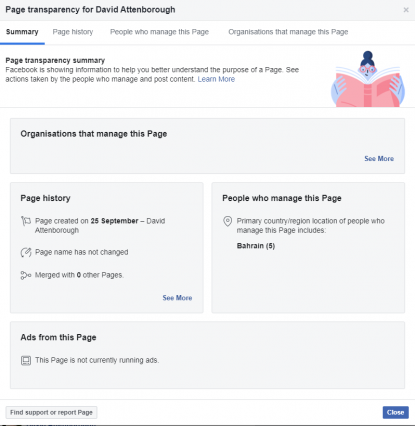 Michael Riley, a representative for Attenborough told AFP in an email on October 27, 2020 that his Instagram account is “the only social media page authorised by Sir David”.

“He has no other social media accounts whatsoever and in my view is highly unlikely ever to have them”, he said.

The claim that the hotel is “the first to produce its own electricity with the same waste from the same building” is also false.

A reverse image search on Google found the original picture was published here on Instagram on January 31, 2020 by freelance filmmaker and photographer Benny Tang.  The image shows the PARKROYAL COLLECTION Pickering in Singapore.

The same picture was also reposted by the hotel’s Instagram account here on March 7, 2019, with credit to the photographer. 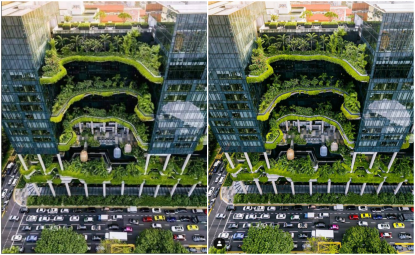 In response to the claim in the misleading posts, the hotel’s marketing and social media manager, Rebecca Ting, told AFP by email on October 26, 2020 that “this statement is not factual”.

Ting included a document that lists the sustainable and green features that do exist for the building. Below are screenshots of the segment from the document: