Social media posts circulating online in February 2021 have shared a purported report stating Italian law enforcement "arrested scores of paedophile cardinals" in Vatican City. The claim is false: the purported report is not a genuine news article. The text appears to have originated from a satirical blog post that used an unrelated photo of Italian police. Whilst two Catholic priests were put on trial in the Vatican in October 2020 over allegations of sex abuse, there have been no credible reports that "scores" of cardinals were arrested at the Vatican for sex abuse in February 2021.

The claim was published here on Facebook on February 11, 2021.

The claim was shared alongside a link to a purported news report published on February 10, 2021, by UN News, a Seoul-based online newspaper that is not affiliated with the United Nations. 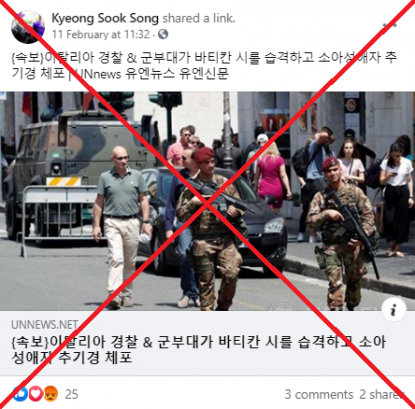 “The Italian parliament voted overwhelmingly to merge Vatican City into the city of Rome, effectively ending Catholicism’s reign over the city-state.

“Everyone knew Vatican City was the centre of an international paedophile ring.

“The operation was code-named Spotlight after the 2015 movie about clergy sex abuse scandal in Boston, Massachusetts.”

The claims are false: the text in the purported report originates from a satirical blog.

UN News, which published the false claim, uses a logo to purport that it has a connection with the UN.DPI.NGO International Environment Medical Services Corps (UNIONKO).

A spokesperson for UNIONKO told AFP on February 17, 2021, that the organisation has no affiliation with UN News.

The same story was published in English in this January 17, 2019, post on the satire blog Laughing in Disbelief. The post is headlined: “Italy Arrests Cardinals And Seizes Vatican City.”

On the blog’s introduction page, the author notes: “You probably clicked a link to a story and you’re here. The story you were reading is satirical.”

As of February 19, 2021, there were no credible media reports that the article was genuine.

AFP reported here in September 2019 about a separate case involving allegations of sex abuse within the Vatican. Gabriele Martinelli, an Italian priest, was accused of sexually abusing altar boys in a seminary over a five-year period starting from 2007. The former rector of the pre-seminary, Father Enrico Radice, faces accusations he facilitated that abuse.

Martinelli professed his innocence in a Vatican court on February 10, 2021, AFP reported here. It is the first time that the Vatican has criminally prosecuted acts believed to have happened within its territory.

The photo at the top of the misleading UN News’ report, which shows Italian armed forces wearing maroon berets, has been taken from this post by Naples-based online newspaper Fanpage.it published on May 23, 2017.

The Italian-language caption of the photo translates in English as: “Security levels skyrocket in Rome, where US President Donald Trump is expected to arrive.”

Below is a screenshot comparison between the image in the misleading post (L) and the photo on Fanpage.it (R):

The former US President Donald Trump visited Rome on May 24, 2017, for a high-profile meeting with Pope Francis, according to this AFP report.