A video that purports to show Microsoft founder Bill Gates with breast implants has been viewed hundreds of thousands of times on Facebook, Twitter, YouTube and Instagram. The footage circulated after the billionaire announced he and his wife of 27 years would divorce. But the footage has been doctored to expand Gates' chest.

The video was published here on May 25, 2021, where it has been viewed nearly a million times. 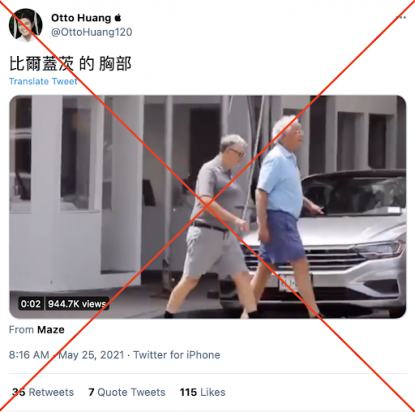 The video shows Bill Gates, with an enlarged chest, crossing a street.

Some social media users appear to have been misled by the clip.

“Isn't s/he getting a divorce to marry someone?” one Twitter user commented.

The video surfaced after Bill and Melinda Gates announced they would divorce after 27 years of marriage.

The footage, however, has been doctored.

A reverse image search on Google found the original video posted here on YouTube by UK-based celebrity news company Gossip Bae, on May 23, 2021.

The video was titled: “Bill Gates spotted after affair and divorce drama”.

The video description reads in part: “Bill Gates is still seen wearing his wedding ring while walking to lunch with friends and bodyguards around Manhattan’s Downtown area.”

Below is a screenshot comparison of the doctored video (L) and the original video (R):

A frame-by-frame analysis of the video in the misleading post found that the wall behind Bill Gates appeared to be distorted as he crossed the street, demonstrating that the footage has been doctored. 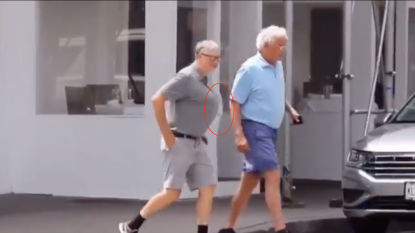 A screenshot, taken on June 1, 2021, of the misleading video with the twisted area circled in red by AFP.

The earliest version of the doctored video AFP found was published here on Twitter on May 25, 2021.

Bill Gates out walking, trying to flatten those curves. pic.twitter.com/fMBM1eZ3hd

The tweet is captioned, “Bill Gates out walking, trying to flatten those curves.”