Skip to main content
A general view of Sri Lanka's newly elected members of parliament are pictured as they being sworn in the 225-member assembly, in Colombo on August 20, 2020. Photo by ISHARA S. KODIKARA

Multiple Facebook posts have shared screenshots of a purported news report which they claim show genuine remarks by a Sri Lankan politician about a fellow legislator’s arrest in connection with the 2019 Easter Sunday attacks. But this claim is false: the screenshots have been doctored to insert fabricated remarks; they actually show a press briefing that happened some two months before the legislator was arrested.

The screenshots were shared on Facebook here on April 24, 2021.

They bear the logo of local television channel Hiru and claim to show remarks by Nalinda Jayatissa, a member of Sri Lanka’s parliament, during a press briefing. 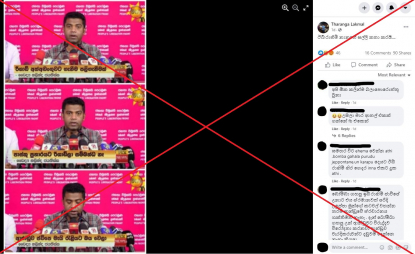 Jayatissa's purported Sinhala-language remarks, written across the bottom of the image, translate as: “Arresting Rishad is an act of revenge / Rishad is not involved in the Easter attacks / Government is worried of the JVP May Day rally”.

The misleading post circulated on the same day Sri Lanka's police arrested legislator Rishad Bathiudeen in connection with the 2019 Easter Sunday attacks that killed more than 200 people. AFP reported on the arrest here.

“Ibrahim’s money speaking”, the misleading Facebook post’s caption says, referring to the father of one of the suspects of the attacks.

Identical screenshots were also shared alongside a similar claim here, here and here on Facebook.

The claim is false: the screenshots have been doctored.

Keyword searches found they were taken from this unrelated press briefing on March 30, 2021 about the discovery of toxins in imported coconut oil in Sri Lanka.

Nowhere in the press briefing does Jayatissa make remarks about Rishad’s arrest.

The fabricated remarks were digitally inserted onto screenshots of the March 30 press briefing.

Below is a comparison of a doctored screenshot in the misleading posts (L) and a screenshot of the actual press briefing (R):

The press briefing was also streamed live on Facebook on March 30, 2021 -- which predates Rishad’s arrest on April 24, 2021 by almost two months.

AFP conducted a check of news telecasts aired by Hiru television channel on March 30, 2021 but did not find any report that indicates Jayatissa made the remarks attributed to him in the misleading posts.