At least two photos of Canadian-American actor Ryan Reynolds shared on social media depict the “Deadpool” star holding t-shirts bearing political slogans. The images are doctored. The original photo showed American musician George Strait holding a country-themed t-shirt. The photo had previously been the target of many alterations for commercial purposes, with different logos displayed on the t-shirt, and Strait’s face replaced by that of other celebrities including Paul McCartney and Kit Harington.

Photos shared on Twitter and Facebook show Reynolds holding t-shirts bearing political messages such as, “Are you a Canadian or are you a Liberal,” or “I am a Canadian I will not sit down! I will not shut up! I will not comply. I want my country back!” 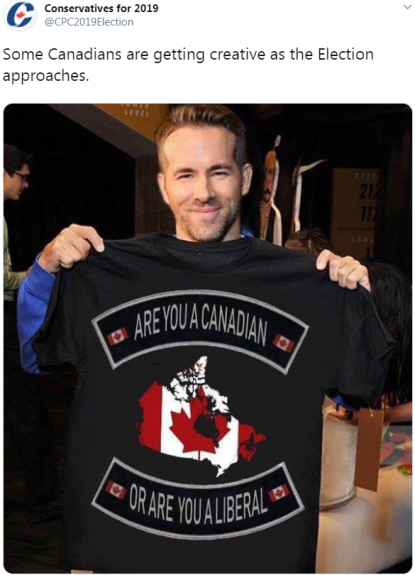 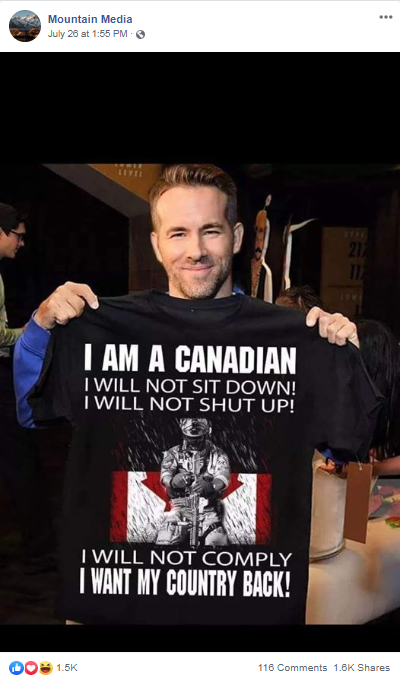 “Some Canadians are getting creative as the Election approaches,” the Twitter account @CPC2019Election commented, in reference to the upcoming Canadian federal elections on October 21.

Although the account uses official Conservative Party of Canada (CPC) imagery, it is not an official CPC account. It is run by Martin Dand, the stated administrator of another Twitter account dedicated to Canadian politics, which also shared the doctored Reynolds photo. Dand states on his personal Facebook page that he manages five political Facebook pages, at least one of which published the fake Reynolds photo.

As a result of this fact-check, the Facebook page Mountain Media updated its post on August 3, 2019 to state that the image is doctored.

However, a reverse image search reveals that Reynolds is not the man in the original photo. The original photo, available here on the Getty Images website, featured country music star Strait holding a t-shirt at the 48th Annual Academy of Country Music Awards in Las Vegas in 2013.

The blue sweater sleeves, the way both hands are holding the t-shirt, as well as the man on the left and the background all match the Reynolds photo, with the difference that the King of Country’s face is above the shirt, not Reynolds’. 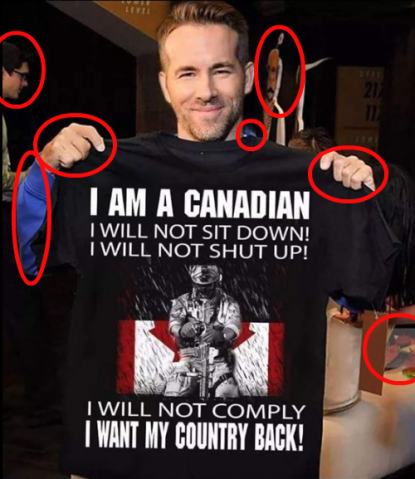 Doctored for commercial use

Older social media posts show the same photo of Reynolds, with the exception that the t-shirt the Vancouver native is holding features Deadpool in an attempt to promote the sale of movie related merchandise.

The Pikachu-Deadpool shirt is more representative of the way the altered photo of Strait was used before it was politicized in Canada: for commercial purposes.

“I think the image is a prime target for manipulation just due to the nature of the framing and ease of removing the watermark and modifying the graphic on the t-shirt,” Mike Windle, the photographer, told AFP by email.

Social media platforms and online sales websites alike hold troves of altered iterations of Windle’s photo, altered to promote certain products of popular culture. Among others, we found Kit Harington promoting “Game of Thrones” on a Russian sales website, Roger Waters showing off Pink Floyd swag on a Georgian forum, Paul McCartney boasting a Beatles shirt on Pinterest, and a proud Andrew Lincoln representing the television series “The Walking Dead” on a blog. 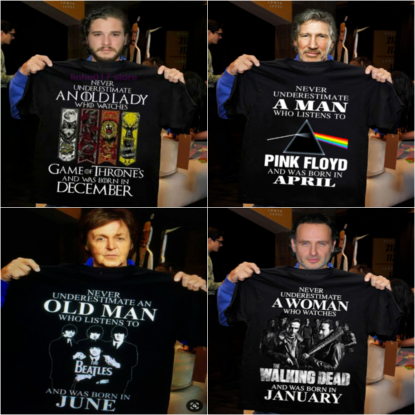 Combo of four screenshots taken on July 31, 2019 of doctored photos

In each photo, Strait’s hands and the Country Music Awards background are visible.

“If you look closely to the faked images, there is still a remnant of the Getty watermark in the lower right hand of the frame,“ Windle pointed out, in reference to the stock image supplier’s watermark noticeable on the original photo, and blurred in the fakes.

Windle says he was not aware of his photo’s evolution on the internet since 2013: “I honestly had no idea that the image was used in any capacity.”

“Images like these were captured in gift lounges at award shows and were usually an obligation for the talent; very ‘grip and grin’. Usually we wouldn't expect the images to be purchased and used outside of usage by the brand who makes the product,” he added.