Skip to main content
A copy of The Times newspaper outside 10 Downing Street in central London on March 30, 2017. (AFP / Justin Tallis)

An image has been shared in multiple Facebook posts that purportedly shows a headline in the February 16, 2021 edition of The Times that reads “Doctors and experts advise against taking experimental jab”. The posts circulated amid widespread mistrust and misinformation around Covid-19 vaccines. However, the image is a fabrication; The Times’s archive shows a different front page on February 16 and the newspaper published an article calling out the story as “fake”.

The image was shared by a New Zealand-based Facebook user here. 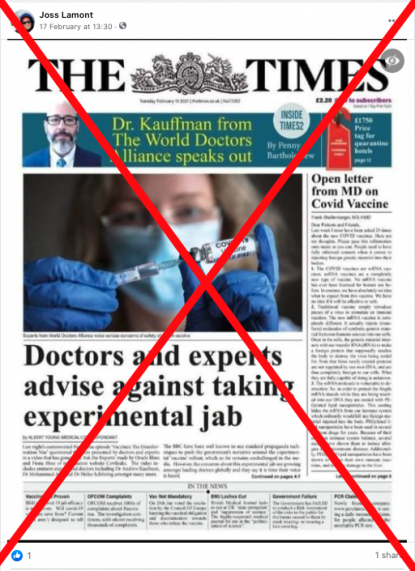 The image shows what appears to be the front page of UK newspaper The Times, with the headline, “Doctors and experts advise against taking experimental jab”.

Other headlines featured on the image read “Dr. Kauffman from The World Doctors Alliance speaks out” and “Open letter from MD on Covid vaccine”.

Andrew Kaufman, is an American psychiatrist and prominent conspiracy theorist who believes that the pandemic does not exist.

The World Doctors Alliance (WDA) is an international group of medics working “with a view to ending all lockdowns and related damaging measures” in wake of the pandemic, according to its website.

AFP has previously debunked a number of claims made by the WDA, including that Covid-19 is “a normal flu virus”.

The date featured at the top of the purported front page reads “Tuesday February 16, 2021”.

The image, however, is a fabrication.

The February 16, 2021 edition of The Times archived on their website does not match the one featured in the Facebook posts. The newspaper’s front page splash on that day read “Vaccination is reducing admissions and deaths”. 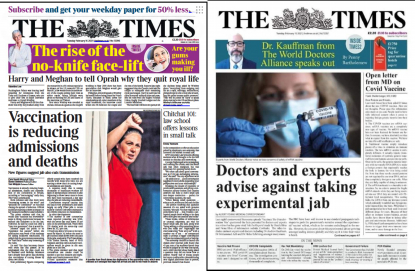 The real February 16 edition of The Times (left) and the fabricated Times front page (right).

The Times also featured stories about Prince Harry and Meghan Markle’s interview with Oprah Winfrey and a law school offering seminars on networking on its front page that day.

There was no story on the front page about doctors advising against taking an “experimental jab”, nor about Andrew Kaufman or the World Doctors Alliance.

The Times responded to the fabricated front page in an article titled “Fake antivax Times front page posted on Twitter”.

According to the article, the fabricated front page first appeared on Twitter, but was taken down after The Times parent company News UK asked the social media platform to remove the post.

“News UK, the owner of The Times, asked Twitter for the picture to be taken down but it took 12 hours for the social media company to remove the false image. The account was suspended the following day,” The Times article reads.

The roll-out of coronavirus vaccine campaigns around the world has sparked a flurry of misinformation about the jabs, helping to fuel widespread vaccine hesitancy.

Health authorities including the World Health Organization and the US Centers for Disease Control and Prevention (CDC) have spoken out to reassure the public that Covid-19 vaccines are safe.

“The vaccines met FDA’s rigorous scientific standards for safety, effectiveness, and manufacturing quality needed to support emergency use authorization,” the CDC said on its website.