An image of a large crowd has been circulating online with claims that it shows the moment in 2022 when “hundreds and thousands” of people took to the streets in Ukraine after the country’s president allowed the preaching of the gospel without restriction for the first time in years. However, the claim is false; the image was taken in Kyiv in 2017 during the 500-year anniversary of the Protestant Reformation in the Ukrainian capital. Furthermore, freedom of religion has been in Ukraine’s constitution since 1996.

The claim was published in Nigeria as “breaking news” on February 2, 2022, by a Facebook page that aims at “catching the next generation for Jesus”.

“Hundreds of Thousands Gather in the Streets of Ukraine to Praise the Name of Jesus, after the President finally gave liberty to preach the Gospel which was banned for so many years,” reads the caption of the Facebook post, which has been shared more than 14,000 times. 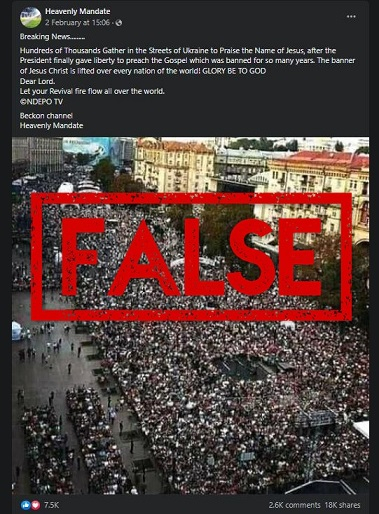 However, the image is not recent and does not show people celebrating religious emancipation.

A reverse image search on Google led to a report published on September 19, 2017, by a Christian news website called Mission Network News. The image, in fact, shows a mass gathering that took place two days earlier in largely-Orthodox Ukraine to commemorate 500 years of the Protestant Reformation, a religious movement from 16th-century Europe that originated in Germany.

“On Sunday, around 500,000 evangelical believers gathered in the central square of Kiev, Ukraine to celebrate the Protestant Reformation’s 500th anniversary and to thank God for His faithfulness in their country,” the publication reads. 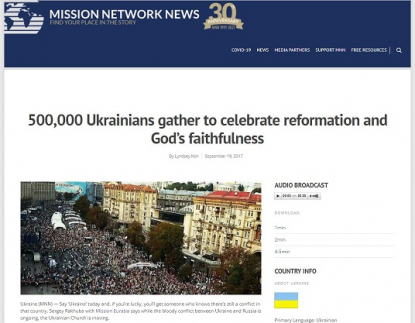 It gives credit for the image to the Facebook page of Mission Eurasia, a Christian organisation with a presence in eastern Europe and Israel. AFP Fact Check found that the image was published on the group’s Facebook page a day after the celebrations.

The Facebook post describes the image as the gathering of “Protestant churches of every denomination from all over the country” in honour of the 500th anniversary of the Reformation at Maidan Square in the capital Kyiv.

“It is estimated that between 150,000 and a half million people participated in the day's events, including a keynote address by Nick Vujicic,” the post reads.

Vujicic is a popular Australian Christian evangelist and motivational speaker. He founded the Life Without Limbs organisation, which uploaded footage of the event to Facebook on September 22, 2017.

Vujicic had said that the gathering was “the biggest event that our team at Life Without Limbs has seen and maybe the largest event ever in Europe”.

Physical features such as buildings in the viral image and the uploaded footage match the exact location of the event in Kyiv’s main street of Khreshchatyk on Google Maps.

In 2016, then-Ukrainian president, Petro Poroshenko, signed a decree to celebrate the 500th anniversary of the Reformation in the country.

Ukrainian laws on freedom of religion

Contrary to the text in the false post, Ukraine has enshrined religious freedom since 1996.

Article 35 of the 1996 Ukrainian constitution establishes that “everyone has the right to freedom of personal philosophy and religion,” according to the English translation of the constitution on the Council of Europe’s website.

“This right includes the freedom to profess or not to profess any religion, to perform alone or collectively and without constraint religious rites and ceremonial rituals, and to conduct religious activity,” the constitution stipulates further.

There is no mention of a purported ban on religious freedom during the Poroshenko era in the Mission Network News article, nor in coverage of the event by the Religious Information Service of Ukraine.