Three photos have been shared thousands of times in social media posts that claim Indonesian President Joko Widodo was pictured maskless at an event to celebrate the Chinese Lunar New Year in 2022. The posts claim the president ignored "health protocols". The photos were shared in a false context: they were taken in January 2020, more than one month before Indonesia reported its first Covid-19 cases.

The photos were posted here on Twitter on February 1, 2022 and have been retweeted more than 1,800 times.

They show Indonesian President Joko Widodo -- popularly known as Jokowi -- with a group of people participating in a Chinese Lunar New Year celebration. None of the group are wearing face masks.

"Jokowi IS SHOWING AN EXAMPLE OF ATTENDING AND GATHERING AT THE EVENT WITHOUT FOLLOWING HEALTH PROTOCOLS.

The post goes on to mention the upcoming fasting month of Ramadan and subsequent celebrations for Eid al-Fitr, which will fall in May this year. 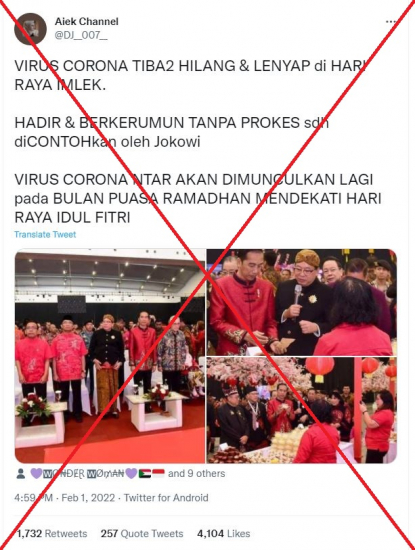 The images -- which circulated in Muslim-majority Indonesia -- have been shared more than 7,700 times alongside a similar claim in Facebook posts here, here, here, and here; and in posts on Twitter here and here.

However, the photos have been shared in a false context.

A reverse image search and keyword searches on Google found the photos were posted here on the Indonesian president's official website on January 30, 2020.

According to the description, the images were taken when Jokowi attended the National Chinese Lunar New Year celebration on January 30, 2020, at the Indonesia Convention Exhibition (ICE) BSD City, near Jakarta.

Below are screenshot comparisons of the pictures in the misleading post (L) and the photos on the president's official website (R): 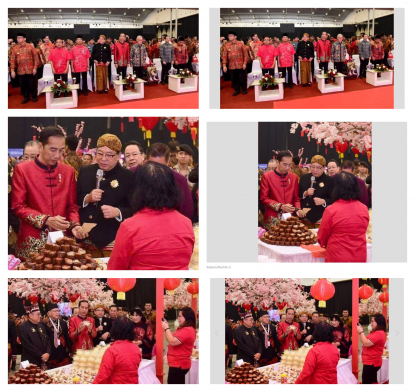 Photos and clips of Jokowi's attendance at the 2020 event were also tweeted by the Ministry of State Secretariat and published by local media here and here.

The president participated in an online Chinese Lunar New Year celebration on February 5, 2022, as he did in 2021.

AFP previously debunked a claim that Jokowi failed to wear a mask at the National Games in October 2021.