An image of a crashed bus being hauled out from under a bridge has been shared on Facebook in Ethiopia with claims that the accident happened recently in the country’s capital Addis Ababa, killing 39 people. This is false; while a crash did occur recently involving a bus, no fatalities were reported. Furthermore, this image is old; AFP Fact Check traced it back to reports of a 2019 accident in which two people died.

The Facebook post, which we’ve archived here, has been shared more than 70 times since it was published on January 20, 2022. It was shared in a group called “FRIENDSHIP”, which has nearly 140,000 members.

Written in Amharic, the post’s caption reads in part: “The Ambessa bus number 60 en route to Ferensay from Piassa crashed over the side of a bridge”. The caption claims brake failure caused the crash in which 39 people died. 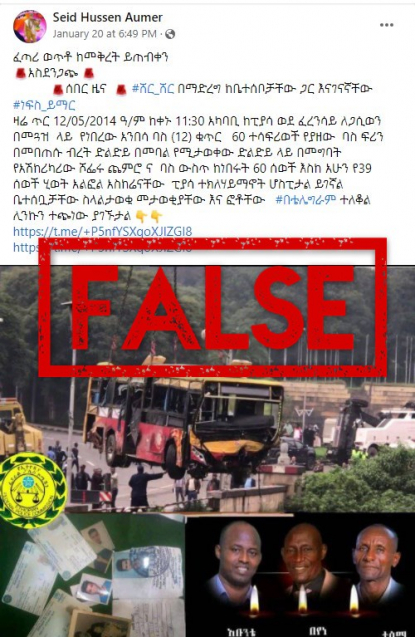 The image shared in the post is a collage of three photos: one showing the bus wreck, another of random identification cards and finally portrait-style images of three men with candles, implying they were among the casualties. Also included is the logo for the Addis Ababa police department.

In the caption, readers are invited to click on two Telegram links to learn more about the identities of the purported victims.

While the photo of the bus crash was indeed taken in Addis Ababa, the incident occurred in 2019, with fewer fatalities than claimed.

A 2019 Amharic-language report from Deutsche Welle shows photos of the same crash taken from different angles. The article explains it happened on September 20, 2019, leaving 31 people injured and two dead. The incident was also covered by local news sites (here and here).

On December 4, 2021, Addis Ababa police warned the public that the image was being used out of context to claim that 39 people had died in a crash. The police commission’s Facebook post confirmed a bus had recently crashed in a different part of the city, without fatalities.

The Telegram links shared in the Facebook posts did not, in fact, lead to any information about the alleged victims, but rather to a Telegram channel that publishes sensational stories designed to lure new readers.

Similar hoaxes often circulate on Facebook, attempting to attract more followers to either Facebook pages or other social media networks like Telegram. AFP Fact Check has debunked some of them here.