An image of a crashed bus being hoisted by a crane has been shared hundreds of times on Facebook with a claim that the accident happened recently in Ethiopia’s capital, Addis Ababa, leading to the death of 27 people. This is false; AFP Fact Check traced the image to reports of a 2019 accident in the capital in which two people died.

The post’s caption begins as a news alert and asks Facebook users to “share this and help us reunite them with their families.”

Translated from Amharic, the post describes the bus crash in detail, claiming it happened this year (which is 2013, in terms of the Ethiopian calendar). “A lion city bus with registration number A 68377, which was carrying 58 people from Shiro Meda to Kasanchis, collided with another Code 3 private black vehicle today, January 8, 2013 under a bridge near Stephen Church.”

Screenshot of the false claim, taken on February 3, 2020

The central image shows a bus being lifted onto a bridge by a crane, while one of two secondary images displays what appears to be an official identification card.

The post was published from a private account on January 16, 2021, on the timeline of a group called “Sincere hearts”, which has nearly 600,000 members.

It claimed that “27 people were killed and 15 others were seriously injured”, adding that identification cards belonging to the victims were found at the scene and were available for collection by contacting the author on instant messaging network Telegram, using a link in the post.

Although the image is real and depicts an actual bus crash in Addis Ababa, the incident happened in 2019, with fewer fatalities than claimed.

Deutsche Welle Amharic (DW) reported that two people were killed and 31 injured when a bus collided head-on with another vehicle on September 20, 2019. The accident was also reported here and shared on Facebook here. 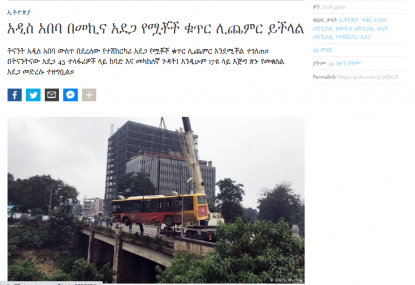 Although some of the information shared in the false Facebook post was correct, the date and death toll were changed.

The first time this post emerged online was on January 15, 2021, and the claim was debunked by PesaCheck. The post was then deleted and republished the next day.

There was no information found concerning the purported identification cards on the Facebook page’s corresponding Telegram channel, an account responsible for publishing sensational stories designed to lure new readers.