Nigerian social media users are circulating a video with claims that it shows Afghanistan’s Islamist Taliban fighters destroying mobile phones in line with a supposed ban on electronic devices. However, the claim is false: the clip was filmed in neighbouring Pakistan where customs officials confiscated and destroyed smuggled goods.

The footage emerged online amid reports about the imposition of restrictions in Afghanistan following the Taliban’s takeover last August. Barely a month into Taliban rule, Afghans in Helmand province were banned from shaving beards while girls were prohibited from attending secondary school.

“Taliban Terrorists in Afghanistan ban use of mobile phones in the country, they gathered them and set all ablaze,” reads the caption on social media posts published by popular Nigerian youth-focused blog YNaija on January 13, 2022. 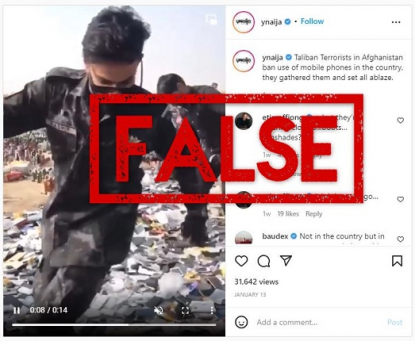 Screenshot taken on January 24, 2022, showing the one of the false posts on Instagram

The 14-second clip shows uniformed men stomping on piles of mobile phones and other electronic equipment. There also appears to be a stash of alcoholic drinks on display.

However, the video is unrelated to Afghanistan or the Taliban.

AFP Fact Check previously debunked a similar claim in Arabic, purporting that the same video clip shows Pakistan security forces enforcing a government ban on the use of mobile phones in the country.

Other local media (here and here) also published clips that showed similar scenes, described as an anti-smuggling exercise that involved the destruction of confiscated illicit alcohol, mobile phones and drugs in Pakistan.

In addition, the green-white flag of Pakistan and the logo of the country’s customs agency can be seen nine seconds into the video on the uniform of the man wearing sunglasses.

These correspond to a picture of a similar customs official taken by AFP photographer Rizwan Tabassum, who covered the event on December 29, 2021, in Pakistan’s largest city, Karachi.

“Custom officials stand near seized liquor during an event organized to destroy seized illicit alcohol and drugs smuggled into the country,” the AFP caption reads. 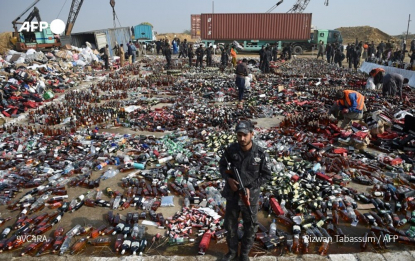 Another image by Tabassum shares similar physical features with some scenes in the video, including bottles of alcohol arranged on the ground, an open blue shipping container, cranes, and armed customs officials.