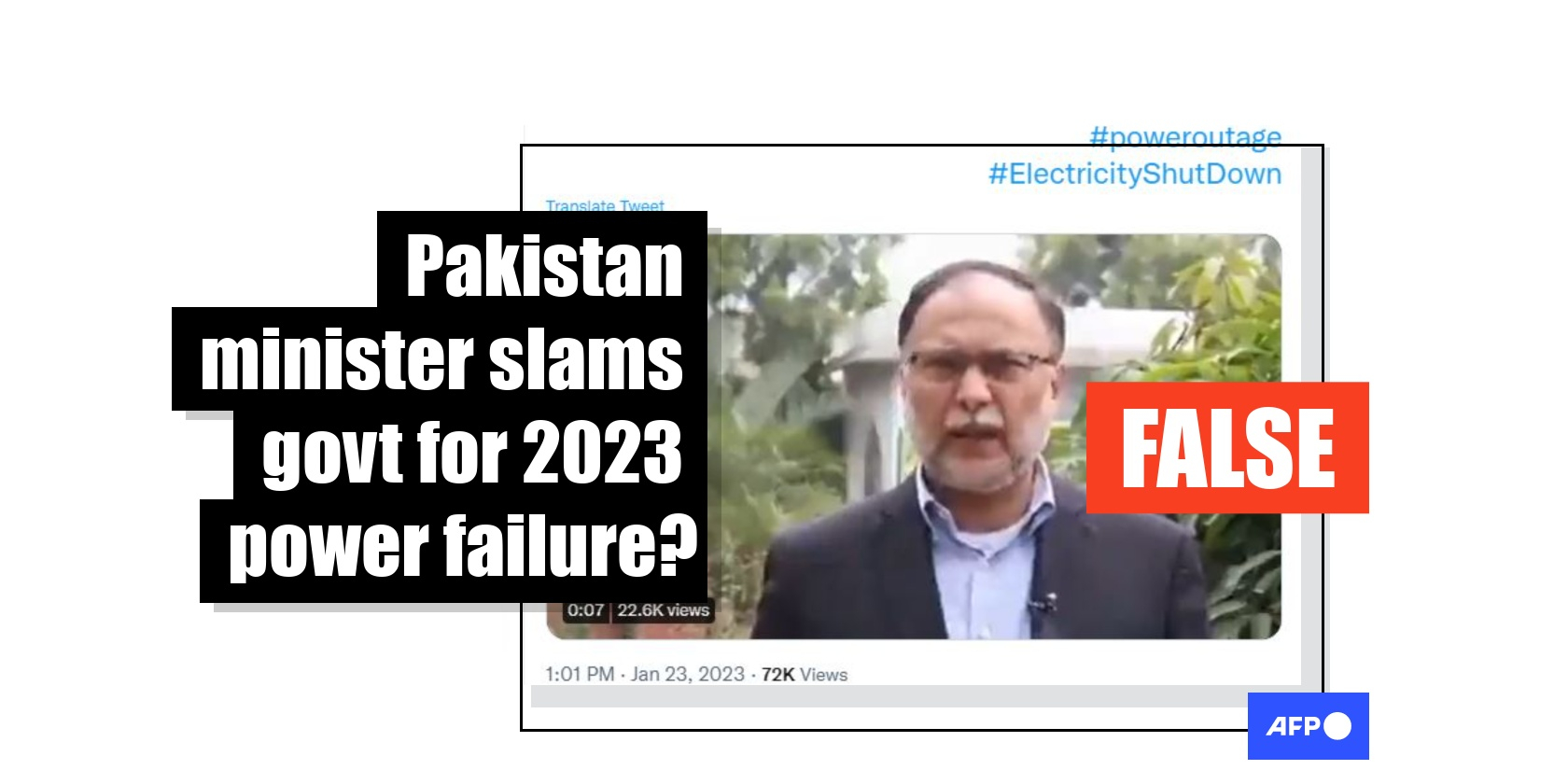 Social media accounts supporting Pakistan's main opposition party have shared a video of government minister Ahsan Iqbal with a false claim that it shows him criticising his own party's ruling coalition for a nationwide power breakdown in January 2023. The video in fact shows Iqbal two years earlier -- when his party was in the opposition -- speaking about the government led by then-prime minister Imran Khan after a similar power failure.

The footage shows Ahsan Iqbal, Pakistan's federal minister for planning and development, criticising the "incompetent" government over a power outage.

"The terrible electricity shutdown has once again shown that this government is incapable and incompetent and doesn't have any of the skills needed to run the country," he says in Urdu.

The video was posted on January 23 in a tweet -- where it has more than 22,000 views -- that says it shows Iqbal speaking after Pakistan awoke that day to a massive power breakdown caused by a fault in the national grid.

Iqbal's Pakistan Muslim League Nawaz (PML-N) heads the coalition government that came to power after Imran Khan was ousted as prime minister in a no-confidence vote in April 2022. 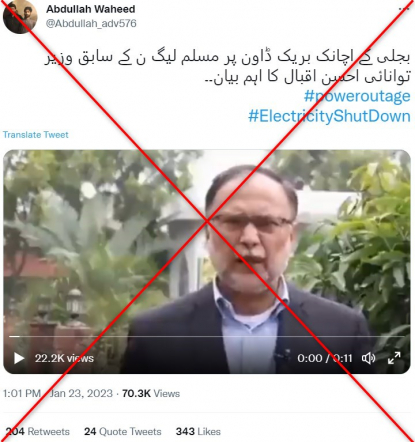 Screenshot of a tweet sharing the false claim, taken on January 24, 2023

Pakistan's economy has since crumbled alongside a simmering political crisis, as Khan and his opposition Pakistan Tehreek-e-Insaf (PTI) pressured his successor Shehbaz Sharif to call an early election.

Some social media users appeared to believe the footage showed Iqbal blaming the ruling coalition for the power outage.

"Absolutely agree with you. It is not only electricity, it is everything. PDM [ruling party coalition] is a bunch of jokers," read one comment.

The video was shared in similar posts by various PTI politicians, including Zartaj Gul, Hussnain Ali Jandanwala and Fayaz-Ul-Hassan Chohan.

A reverse image and keyword search on Google found the video in a report by Pakistan's Geo News posted on YouTube on January 10, 2021.

That weekend, Pakistan had suffered a national power breakdown which officials blamed on an "engineering fault".

The clip shared in false posts can be seen from the 0:35 second mark of the video, which is titled in Urdu: "The country's economy is drowning | Ahsan Iqbal".

After making the comments seen in the clip shared in false posts, Iqbal mentions Imran Khan by name.

He says in Urdu: "Imran Niazi [Imran Khan] thought: 'The country's economy is drowning day by day, new crises are emerging, so let's try to reboot Pakistan like a mobile phone and maybe it'll work!' He shut down the whole power system and tried to start it again."

Iqbal's PML-N posted the longer version of the video on Facebook on January 10, 2021.

Below is a screenshot comparing scenes from the false posts (left) with Geo News's video (right):

Pro-PTI accounts have previously shared a video of Indian Prime Minister Narendra Modi criticising Imran Khan's government in 2019 in posts misleadingly claiming he was speaking about the government that succeeded him.