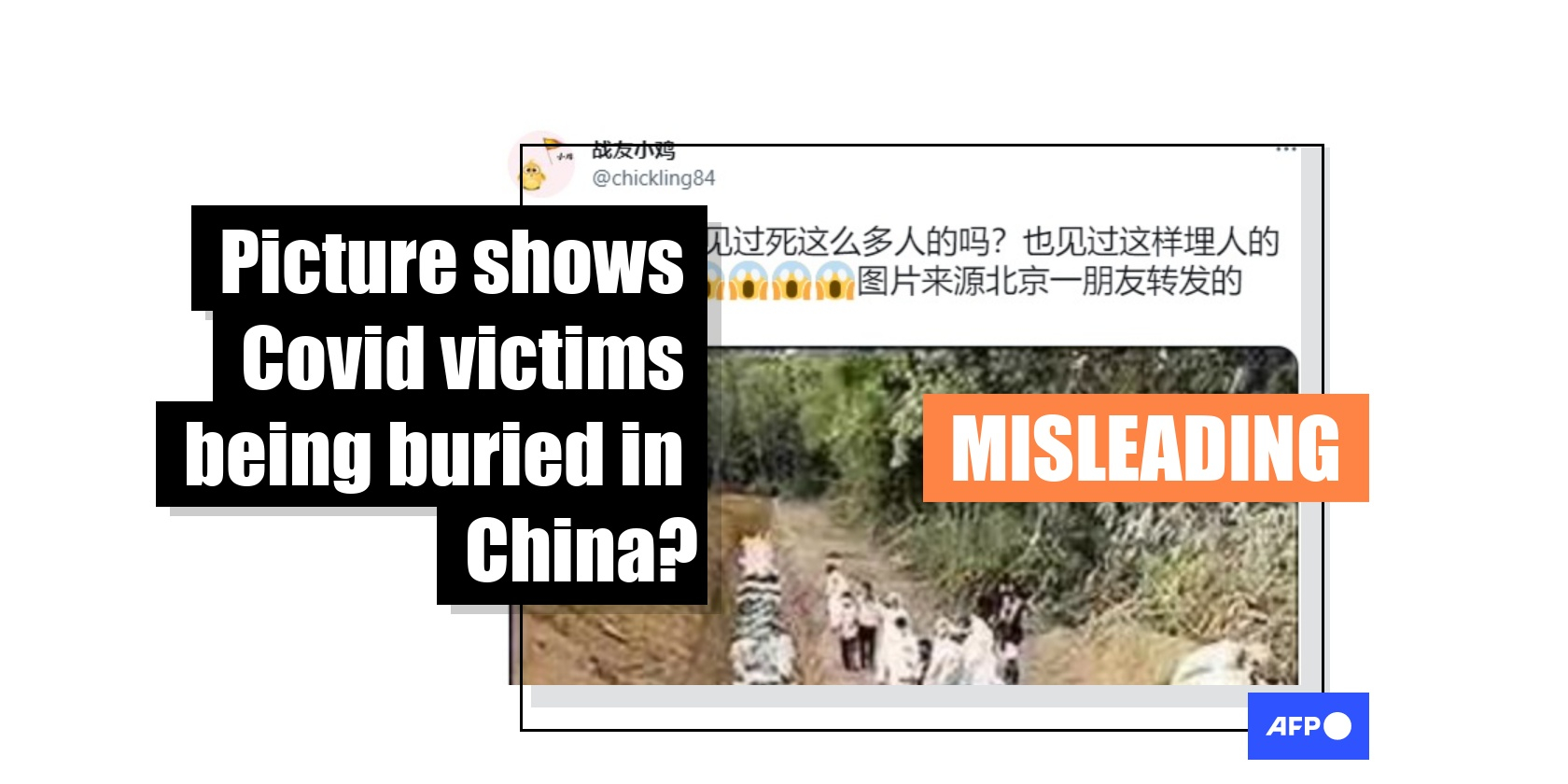 As China faced a wave of Covid-19 infections after its abrupt dropping of harsh anti-pandemic restrictions in December 2022, a photo showing bodies being buried in a mass grave was shared hundreds of times in Chinese-language tweets that misleadingly suggested it was taken in the country. The photo was in fact taken by an AFP photographer in Thailand in December 2004 and shows rescue workers burying victims of the Indian Ocean tsunami that killed approximately 220,000 people.

The photo, which shows a pile of plastic-wrapped bodies about to be buried in a mass grave, was shared on Twitter here on January 4, 2023.

It has been shared more than 350 times. 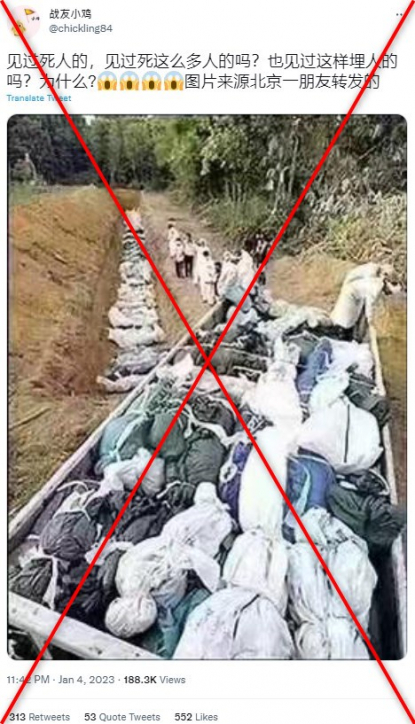 A screenshot of the misleading tweet, captured on January 18, 2023

It circulated as Chinese hospitals were hit by a flood of mostly elderly patients, crematoriums were overloaded and many pharmacies ran out of fever medications after the country's hardline Covid-19 containment policy was abruptly lifted.

On January 14, Chinese authorities reported almost 60,000 Covid-related deaths between December 8 and January 12. It was the first major toll released by authorities since Beijing loosened virus restrictions in early December.

AFP reported that the World Health Organization had accused China of heavily underreporting the number of victims, but Chinese health officials said dwelling on the precise figure was "unnecessary".

The photo was shared alongside similar claims elsewhere on Twitter here, here and here.

Although some social media users pointed out the photo was not taken in China, others appeared to believe the claim.

One user wrote: "Look how powerful Emperor Xi Jinping is!"

"Mass Graves of the Chinese Communist Party," wrote another.

But the photo in fact shows a mass grave in Thailand for victims of the deadly 2004 Indian Ocean tsunami.

A reverse image search on Google led to a similar photo in AFP's photo archives.

According to the photo's description, it was taken by an AFP photographer on December 31, 2004.

Takua Pa is a district in southern Thailand.

Below is a screenshot comparison of the photo used in the misleading tweets (left) and the AFP photo (right):

The 2004 Indian Ocean tsunami was triggered by a 9.1-magnitude earthquake that struck Aceh province, on the northern tip of Indonesia's Sumatra island, on December 26, 2004.

The waves pounded several countries around the Indian Ocean, killing more than 170,000 in Indonesia alone.

About 50,000 people were killed in other countries, bringing the total fatalities to approximately 220,000, making it one of the worst natural disasters in human history.

There was no warning of the impending tsunami, giving little time for evacuation, despite the hours-long gaps between the waves striking different continents.