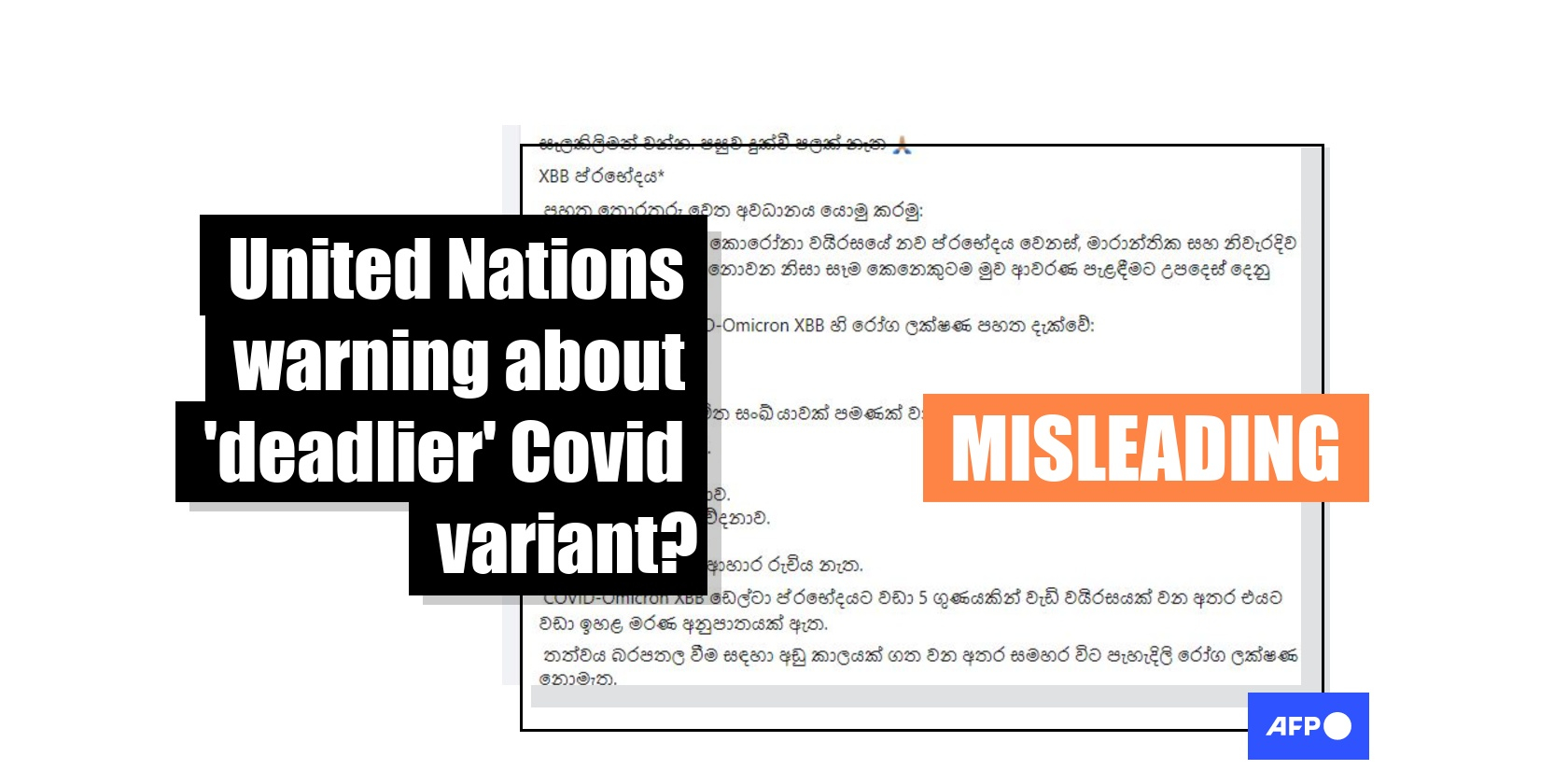 The United Nations has rebuked a fabricated statement attributed to the agency, which warns that the Omicron XBB coronavirus subvariant is "deadlier" than the Delta strain. Health experts say that while the subvariant is highly transmissible, evidence available in January 2023 showed that neither the XBB subvariant nor the more-recent XBB.1.5 subvariant causes more severe disease or death than Delta. AFP has previously debunked misinformation about XBB.

"XBB variant," it reads. "Pay attention to the details below."

The XBB Omicron subvariant was first identified in India in August. A sublineage of XBB -- called XBB.1.5 -- was detected in the United States two months later and is considered the most transmissible Covid variant yet.

It is not clear which of these subvariants the post is referring to.

The Delta variant was first detected in October 2020 and has since been overtaken by the more-transmissible Omicron variant as the world's dominant Covid strain.

"It will not take long for severe symptoms to manifest," the post adds, listing symptoms as body ache, headache, neck pain, upper back pain, pneumonia and loss of appetite -- but "no cough or fever".

The post ends by saying: "A message from the United Nations".

The same message circulated in Facebook groups in Sri Lanka, including here and here.

A representative for the United Nations' office in Sri Lanka said the warning was fake.

"The UN office in Sri Lanka has not issued any such statement or letter," the spokesperson told AFP on January 10.

There was no trace of the statement on the UN's official Facebook and Twitter accounts, as of January 20.

AFP previously debunked a near-identical message that circulated on Facebook in November as the XBB variant drove up Covid cases in Singapore.

At the time, health experts said there was no evidence that the XBB variant was "deadlier" than the Delta variant.

The World Health Organization said in a statement on October 27: "While further studies are needed, the current data do not suggest there are substantial differences in disease severity for XBB infections."

Singapore's health ministry also refuted the claim in a statement on October 11, saying there was "no evidence of XBB causing more severe illness".

"So far, the large majority of patients continue to report mild symptoms such as sore throat or slight fever, especially if they have been vaccinated."

"There is no evidence to believe the XBB variant is deadlier than the other variants," a representative for Sri Lanka's Health Promotion Bureau told AFP on January 10.

A spokesperson for the World Health Organization (WHO) in Sri Lanka told AFP on January 10 that the agency had not issued any statements that XBB was deadlier than Delta.

The WHO said in a rapid risk assessment on January 11 that the XBB.1.15 subvariant "does not carry any mutation known to be associated with potential change in severity", although it stressed that "severity assessments are ongoing".

He pointed to a preprint study from January 6 that looked at Omicron infections in India, concluding: "The current study indicates that the XBB variant is causing mild disease in India."

Ian Jones, professor of virology at Britain's Reading University, said that he had not seen any evidence that XBB.1.5 symptoms were "significantly different" to those associated with previous variants.

"If anything, it seems to be milder and not to have the older hallmarks of infection, like loss of taste and smell," he told AFP on January 17.

A study published in the journal Cell on December 13 said that while new Covid subvariants could cause a surge in breakthrough infections, Covid-19 vaccines "have been shown to remain effective at preventing hospitalization and severe disease even against Omicron."