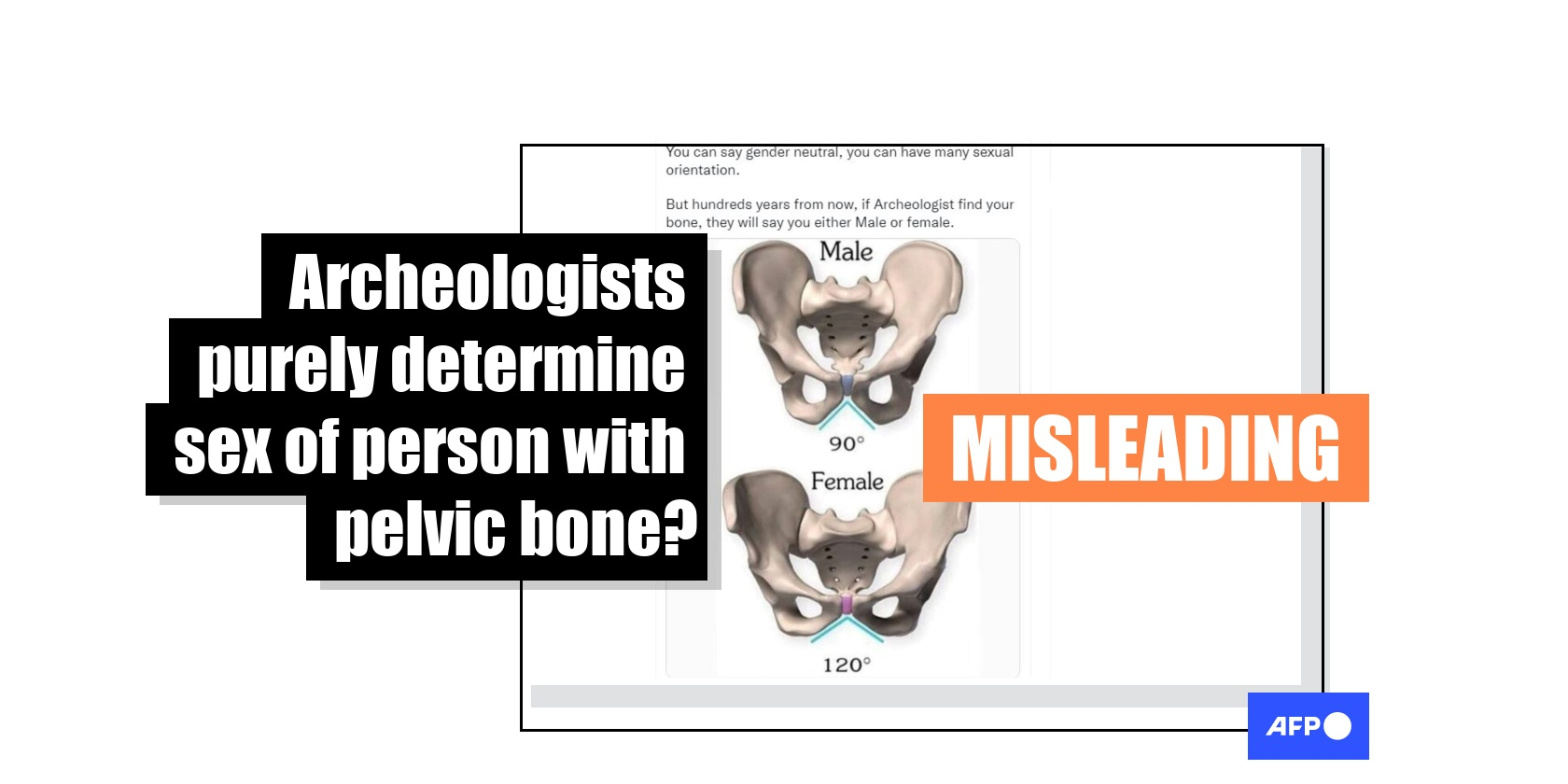 A misleading claim that archaeologists can purely determine the sex of a person from the pelvic bone in their remains and that their conclusion is always either male or female has been shared tens of thousand of times by social media users in different countries. However, experts say it is difficult to determine sex from the pelvic bone alone, and that these estimates are on a spectrum and not always binary.

"You can say gender neutral, you can have many sexual orientation. But hundreds years from now, if Archeologist find your bone, they will say you either Male or female," said this tweet from Indonesian physician Dr Gia Pratama on October 11, 2022.

The post -- which included an image showing diagrams of two pelvic bones, one marked as male and the other, the slightly wider one, as female -- has been retweeted more than 21,000 times. 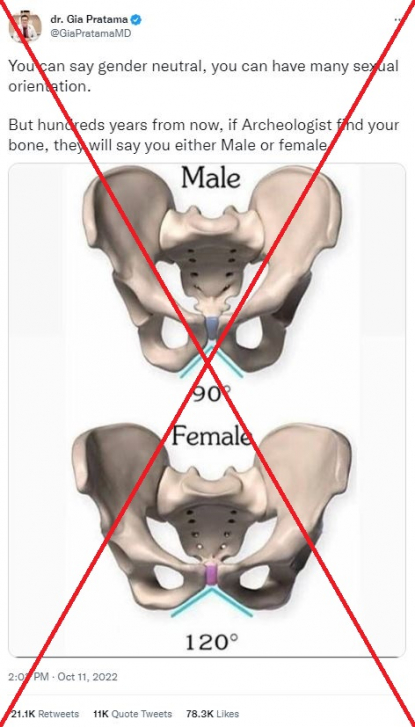 The doctor also posted the same photo, alongside an identical caption, on his Instagram account here, where it has garnered more than 4,100 Likes.

The same image has been shared more than 3,400 times after it appeared with the same claim on various religious Facebook pages in different countries, such as Indonesia, Pakistan, India and the United States.

Responses to the posts included anti-LGBTQ comments. "'T' in LGBT stands for Toxic," wrote one Facebook user, while another said, "The fact is: There are only two genders and a lot of mental illness."

However, the claim is misleading. Examination of the bones alone is not enough to determine the sex of a person, experts say.

"We cannot say definitively what sex an individual was based on looking at the shape of their bones," said Caroline VanSickle, a biological anthropologist and assistant professor at A.T. Still University, in the United States. "We can offer a fairly educated guess, but even then we sometimes get the answer wrong or end up with inconclusive results.

"We also lack methods to identify intersex individuals, who make up around two percent of the population, and have limited data on how modern gender-affirming hormone therapies might affect the skeletal features traditionally used to estimate sex," VanSickle, who wrote a Twitter thread in response to the misleading claim, told AFP.

According to Rebecca Gowland, an archaeology professor at Durham University in England, archaeologists will usually assign a skeleton to one of five categories – male, probable male, unknown, female or probable female – and not just the male-female binary as claimed by the misleading posts.

"The ambiguity is based on a number of different factors ... [including] poor preservation, or it could be that some of the skeletal traits used to estimate sex are ambiguous ... in that particular skeleton," she told AFP.

Pamela L. Geller, an associate professor at the Department of Anthropology at the University of Miami, concurred.

"When archaeologists analyze bones in burials, sex estimation is tricky for several reasons. Preservation can be poor," she told AFP. "Not all skeletal elements show sexual dimorphism, which is also not very pronounced in humans."

Geller also said: "Humans and non-humans exhibit a range of intersex conditions ... So recognizing that there is a tremendous range of human variation, really, what we identify are ideals about male-ness and female-ness. And then we try to cram the majority of people into those ideals even though they might not fit so well."

The experts also emphasise that gender identity and biological sex are not synonomous.

"Sex pertains to biology," Geller said. "Gender is cultural; it is learned, shared, context-based, can change throughout one’s life, and tied to the identities and roles we take on or have imposed on us."

"Many cultures, past and present, have non-binary gender systems," Gowland said. "There are plenty of examples of skeletons sexed as biologically female that are buried with male-identifying material culture (e.g. the Birka Burial) and vice versa."

"The best we can do is to offer an estimate of what the sex seems to be based on how the skeleton in question compares with others, but that tells us nothing about the person's gender identity during life," VanSickle said.

Gowland directed AFP to this statement from the British Association for Biological Anthropology and Osteoarchaeology (BABAO), published on October 17, 2022.

"Osteoarchaeologists and forensic anthropologists have to consider both the biological sex and gender identity of an individual," BABAO said in the statement.

"These professionals understand that biological sex exists on a spectrum, of which skeletons and the sexual variation they show is only one part of a greater whole.

"They also understand that the assessment of sex using skeletons is not 100% accurate and this analysis may not align with an individual’s biological sex or gender identity."