After Oxfordshire County Council in southeast England approved a £6.5 million ($7.93 million) trial to reduce traffic congestion, false posts wrongly suggested that councillors had approved a "climate lockdown" for 2024. The council's spokesperson said that residents would be free to move around the city and no lockdown had been ordered. A campaigner who backed the trial told AFP the scheme aims to help to reduce congestion, while an Oxfordshire councillor who opposed the trial said the social media posts were "untrue".

The article, which was published by online magazine Vision News on November 30, suggested Oxfordshire residents would be "confined to their local neighbourhood and have to ask permission to leave it all to 'save the planet'."

“Oxfordshire County Council yesterday approved plans to lock residents into one of six zones to 'save the planet' from global warming.

"The latest stage in the '15 minute city' agenda is to place electronic gates on key roads in and out of the city, confining residents to their own neighbourhoods,” the text reads. 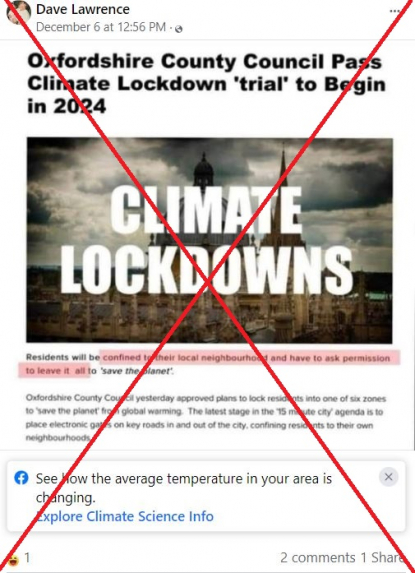 A screenshot of the misleading post, captured on December 9, 2022

According to the county’s website, six traffic filters will be installed inside Oxford roads “to reduce traffic, make bus journeys faster and make walking and cycling safer.”

The screenshot and the article have been shared more than 940 times, with the claim spreading online in Australia, the United States, Canada and the UK.

The claim has also spread in other languages including French and Portuguese.

According to a council spokesperson, residents will not be locked down in their homes as part of the plans, which aim to reduce congestion.

“Traffic filters are not a climate lockdown, they are designed to reduce traffic on inner city roads in Oxford,” the spokesperson told AFP on December 8.

"Everywhere in the city will still be accessible by car, although some private car drivers may need to use a different route during the operating hours of the traffic filters."

The council issued a statement in response to the misleading claim circulating online on December 7, saying its staff and councillors had been abused due to "inaccurate information" on social media and that it would report the most extreme abuse to the police.

Conservative county councillor Liam Walker, who opposed proposals for the traffic filters trial, tweeted in response to the online claims: "I don’t support the LibDem/Labour/Green bus gate plans but this is a completely untrue tweet. Residents aren't on lockdown & traffic can enter/exit the different zones."

The six traffic filters will operate seven days a week, except for two filters on Hollow Way and Marston Ferry Road, which will operate Monday to Saturday, according to the council's website.

Private vehicles without permits travelling through filters will be charged a penalty of £70 ($85.3). Other vehicles -- including buses, coaches, taxis, vans, mopeds, motorbikes and HGVs -- will be allowed on the routes at all times.

Campaign director for Oxfordshire Liveable Streets, Zuhura Plummer told AFP on December 7 that claims of a "climate lockdown" were not true.

"It's a scheme to help speed up buses as they get caught in a lot of traffic, and to make cycling safer and more pleasant," she said.

Vision News falsely claimed that residents would be locked into one of six zones as part of a "15-minute-city" agenda.

Plummer said: "Nobody is kept in their houses and the city is not divided into zones, there are no barriers and the roads are not closed. Any claims of this sort are categorically untrue."

On its website, the council says proposals for "15-minute neighbourhoods" aims to ensure that every resident has all the essentials (shops, healthcare, parks) within a 15-minute walk of their home.

The council's spokesperson said: "All parts of the city will still be accessible by private cars, and there will not be any electronic gates or other physical barriers on roads."

According to the council, the trial is set to be held for six months from late 2023 or early 2024, before a public consultation to decide on a long-term strategy.