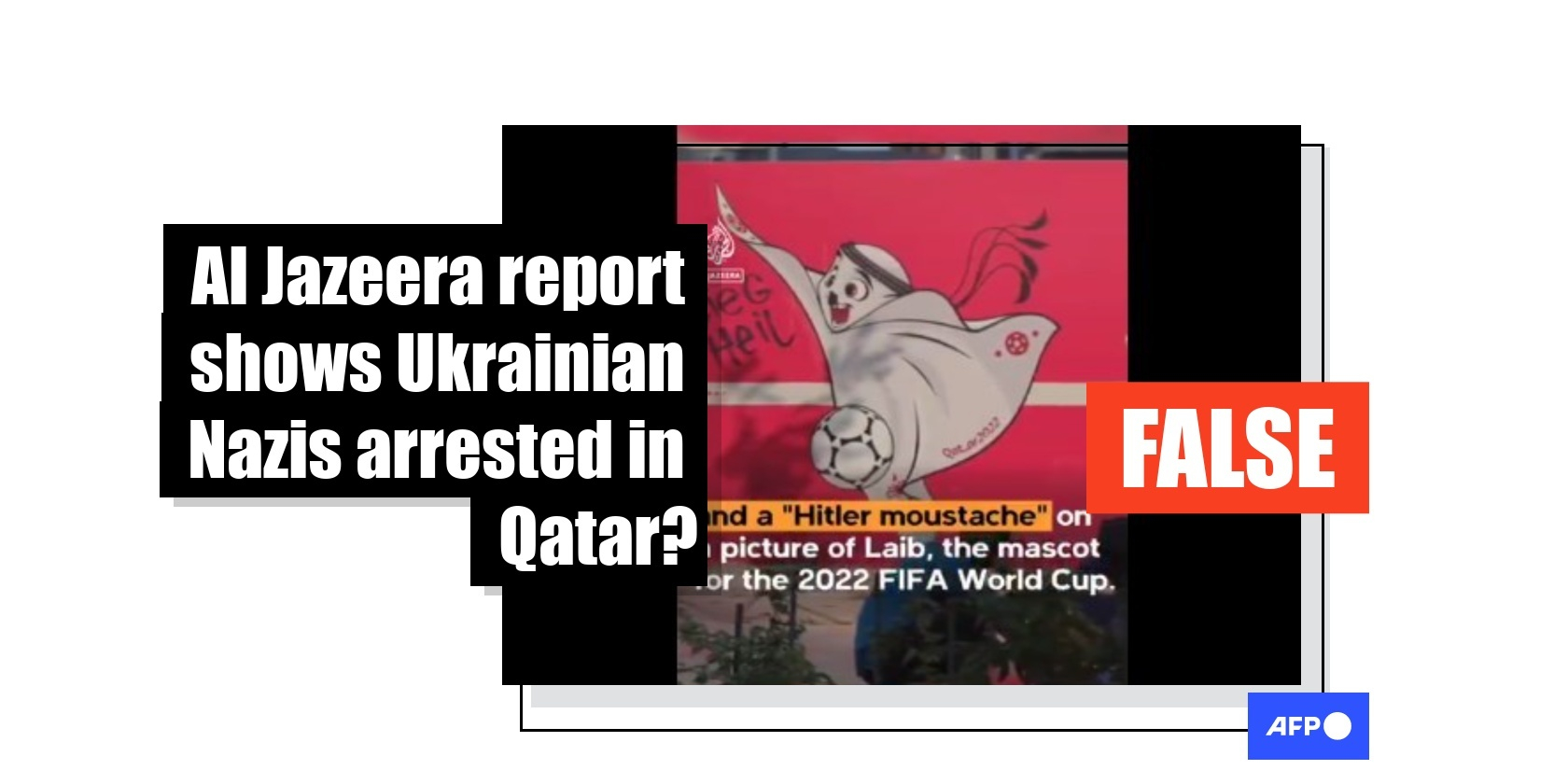 The Al Jazeera news network has denied broadcasting a video claiming Ukrainian fans were arrested in Qatar for adding Nazi graffiti to a picture of the World Cup 2022 mascot. The channel added that its logos had been used without its permission. No such arrest has been announced by the Qatari authorities and Ukraine did not even qualify for this year's football tournament. Additionally, many of the images visible in the clip – which repeats the Russian narrative that Ukraine is under the sway of Nazi ideology – are taken from events unrelated to the global competition.

“Nazi Ukrainians were arrested in Qatar after they drew swastikas on football posters,” reads a tweet from November 22, 2022, featuring a video with graphics and a logo resembling those of international news channel Al Jazeera. 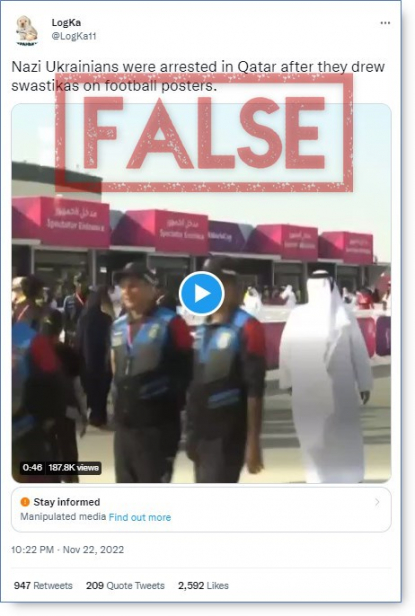 A screenshot taken on December 5, 2022, of the false tweet

Similar claims were made in French, Serbian and Polish, garnering hundreds of views.

The video, viewed more than 180,000 times, includes a photo of Ukrainian fans cheering during a match and a poster of the FIFA World Cup 2022 mascot La’eeb wearing a moustache reminiscent of Adolf Hitler’s and the Nazi slogan "Sieg Heil" (hail to victory) daubed on it. Also included are visuals of police officers making an arrest.

The video, however, is a hoax.

The clip does not appear on Al Jazeera’s website. The network told AFP Fact Check the video was “completely fake” and that “Al Jazeera never published this or any other material related to it”.

The broadcaster tweeted a similar denial on November 24, 2022.

Other clues indicated that the video was fabricated: the text referring to the mascot as “Laib” and to the “El Bait stadium”, whereas Al Jazeera spells them “La’eeb” and “Al-Bayt” – as seen in its own debunk.

The Qatar interior ministry, ever active on Twitter, has not made any public announcements about Ukrainians being arrested. It is yet to respond to AFP Fact Check's request for comment.

Ukraine was defeated by Wales in a qualifying match on June 5, 2022, meaning the country missed out on the World Cup.

The photo of Ukrainian fans seen between the eighth and twelfth seconds of the video was taken on June 15, 2019, in Lodz, Poland, during the final of the under-20s World Cup between Ukraine and South Korea, according to the Getty Images caption.

Screenshots comparing the video and the Getty Images taken on November 25, 2022

AFP Fact Check traced the images of police officers visible between 31 seconds and 41 seconds in the video to a programme on the Alrayyan TV channel. The show reports on interventions by the Qatari police’s Al-Fazaa unit, as seen in this YouTube video published on September 22, 2013.

Comparison screenshots of the hoax video, left, and the original footage from 2013

This was nine years before the Qatari interior ministry unveiled the uniforms of the special unit in charge of World Cup security.

AFP Fact Check has not yet been able to find the origins of the photo depicting the Nazi graffiti on the mascot picture or determine if it was superimposed digitally. Giuseppe Cacace, an AFP photographer who has been covering the tournament in Qatar, said “banners [with the mascot] are ubiquitous in Doha to hide the sites under construction”.

Cacace, however, added that he personally has “never seen” the graffiti depicted in the video on banners in Doha.

AFP Fact Check analysed the image using InVID-WeVerify, a free analysis software, to detect possible manipulations and found that the slogan “Sieg Heil” is highlighted with blue dots, indicating that it was likely added to the original image after it was taken. 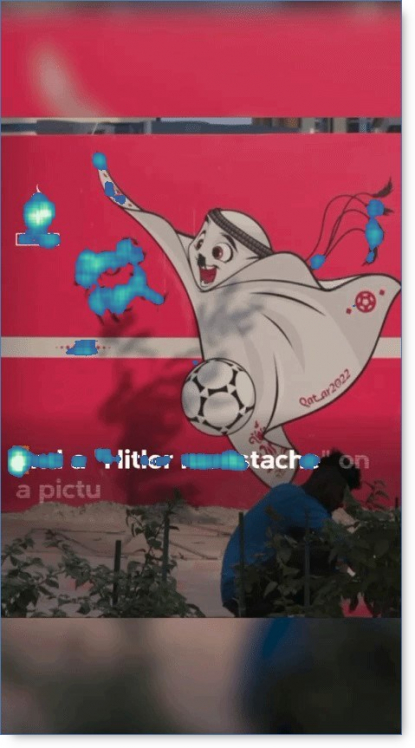 The earliest traces of the claim can be found in an article published by Russian press agency Ria Fan on November 22, 2022, at 12:10 pm (0910 GMT) with a headline translating to: “Drunk Ukrainians added Hitler’s moustache to the symbol of the World Cup in Qatar and wrote a Nazi slogan.”

The text, which does not mention any arrests, only says that “residents did not appreciate the joke about the Ukrainians and called the police”. It ends by citing another Ria Fan Russian article describing an evening experienced by English supporters at the home of a Qatari sheikh.

While the report about the English fans was verified as true, the article on the purported Ukrainian fans remains evasive on the sourcing and claims that these “images appeared on Telegram channels".

At 2:26 pm (1126 GMT) on the same day, Russia’s Tsargrad TV reported the alleged incident in an article, this time citing "Al-Jazeera TV channel" as a source and claiming that the Ukrainian fans were arrested by the police. 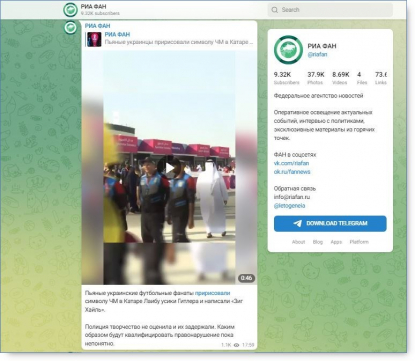 Screenshot taken from Telegram on November 25, 2022

The accusations in the viral video echo the Kremlin’s rhetoric that Russia’s military intervention is aimed at “the demilitarisation and denazification of Ukraine”, an argument rebuked by several experts interviewed by AFP Fact Check in March 2022. If ultra-nationalist movements are active in Ukraine, particularly in the army, they remain a "minority" and marginalised at the political level, the analysts said.

This is not the first time that a news channel has been misrepresented in order to peddle false Nazi claims. In April 2022, AFP Fact Check debunked a fake Figaro video that supposedly showed Chanel stores being vandalised with stickers of Hitler’s face.