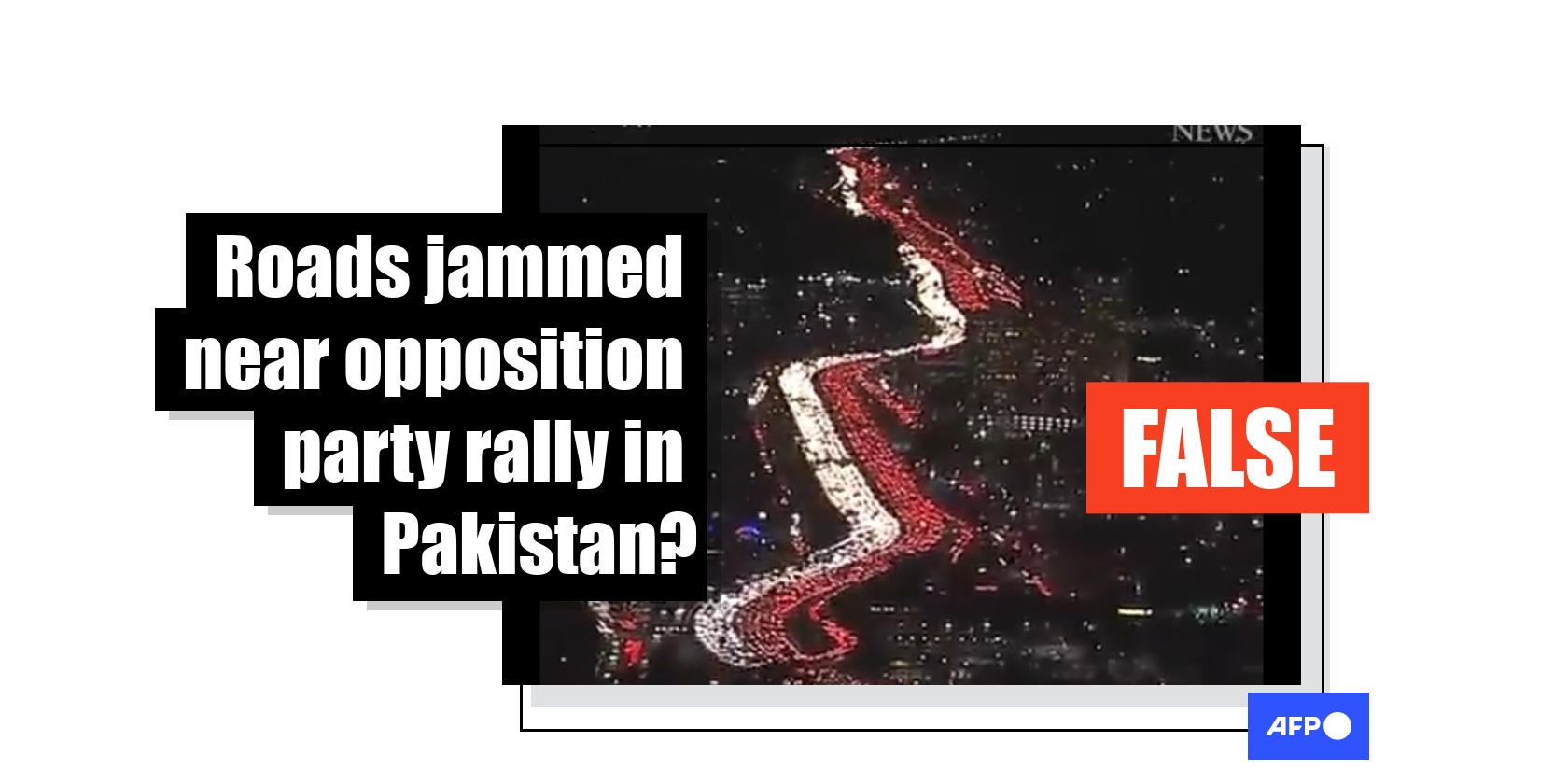 As supporters of Pakistan's former prime minister Imran Khan rallied in Rawalpindi in late November 2022 to demand early elections, a video was viewed hundreds of thousands of times in social media posts that falsely claimed it showed a massive traffic jam around the rally site. The video has in fact circulated since 2017, in a news video about traffic in Los Angeles as Americans travelled for the Thanksgiving holiday.

It appears to show an aerial view of a lengthy traffic jam taken at night, as ambient music plays in the background.

The post's Urdu-language caption translates to English as: "Roads are jammed around Rawalpindi and Islamabad. These people have not yet reached the rally site due to excessive congestion."

The "rally" mentioned in the caption appears to refer to one held by Pakistan's former prime minister Imran Khan on the same day on a major road in Rawalpindi -- a garrison city neighbouring the capital Islamabad.

AFP reported that Khan addressed tens of thousands of supporters there, in the climax of a "long march" by his Pakistan Tehreek-e-Insaf (PTI) party to demand the government call snap elections. 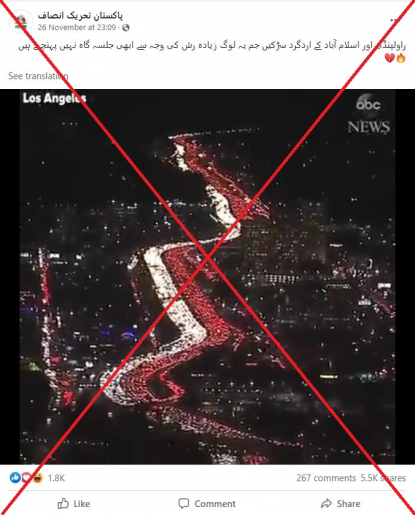 Since leaving office in April 2022, Khan has held a series of mass rallies and frequently made unfounded claims that he was ousted by a US-led foreign conspiracy and questioned the military's role in politics.

The rally on November 26 was his first since being shot in an assassination attempt earlier in the month. Without offering evidence, Khan has named Prime Minister Shehbaz Sharif, interior minister Rana Sanaullah and a senior military officer of being the architects of the assassination attempt -- charges they have all dismissed as lies.

Despite "Los Angeles" and the logo of US-based ABC News being visible in the video's top left and right corners, it was still shared with a similar claim about it showing traffic around Rawalpindi and Islamabad on Facebook here, here and here; and on Twitter here, here and here.

Comments from some users also suggest they were misled by the claim.

Another said, "See it for yourself (rivals), this is all because of Khan."

The video, however, shows a traffic jam in the United States -- not Pakistan.

A reverse image search on Google using keyframes from the video led to the verified Facebook page of ABC News.

A video that corresponds to the video falsely shared on social media was posted on the page on November 22, 2017, with the title, "Aerial footage shows bumper-to-bumper traffic in Los Angeles as Americans get a head start on Thanksgiving travel".

Both videos have "Los Angeles" written in the top-left corner and the logo for ABC News in the top-right corner, and have the same ambient music playing in the background.

Below is a screenshot comparison of the video used in the false social media post (left) and the video posted by ABC News in 2017 (right): 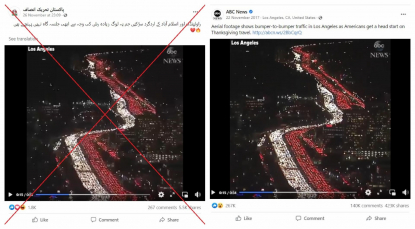 A closer analysis of the video found a sign on a building that reads, "Variety".

A keyword search on Google shows that the offices for the entertainment magazine Variety are located in Los Angeles, while images from Google Maps also match up with the video circulating in a false context on social media.

Below is a screenshot comparison of the video that was shared on social media (left) and the same location as it appears on Google Maps (right), with the building featuring the Variety sign highlighted in yellow:

Screenshot comparison of the video that was shared on social media (left) and the same location as it appears on Google Maps (right), with the building with the Variety sign highlighted in yellow

AFP has previously debunked a false claim about crowds at a Khan rally here.