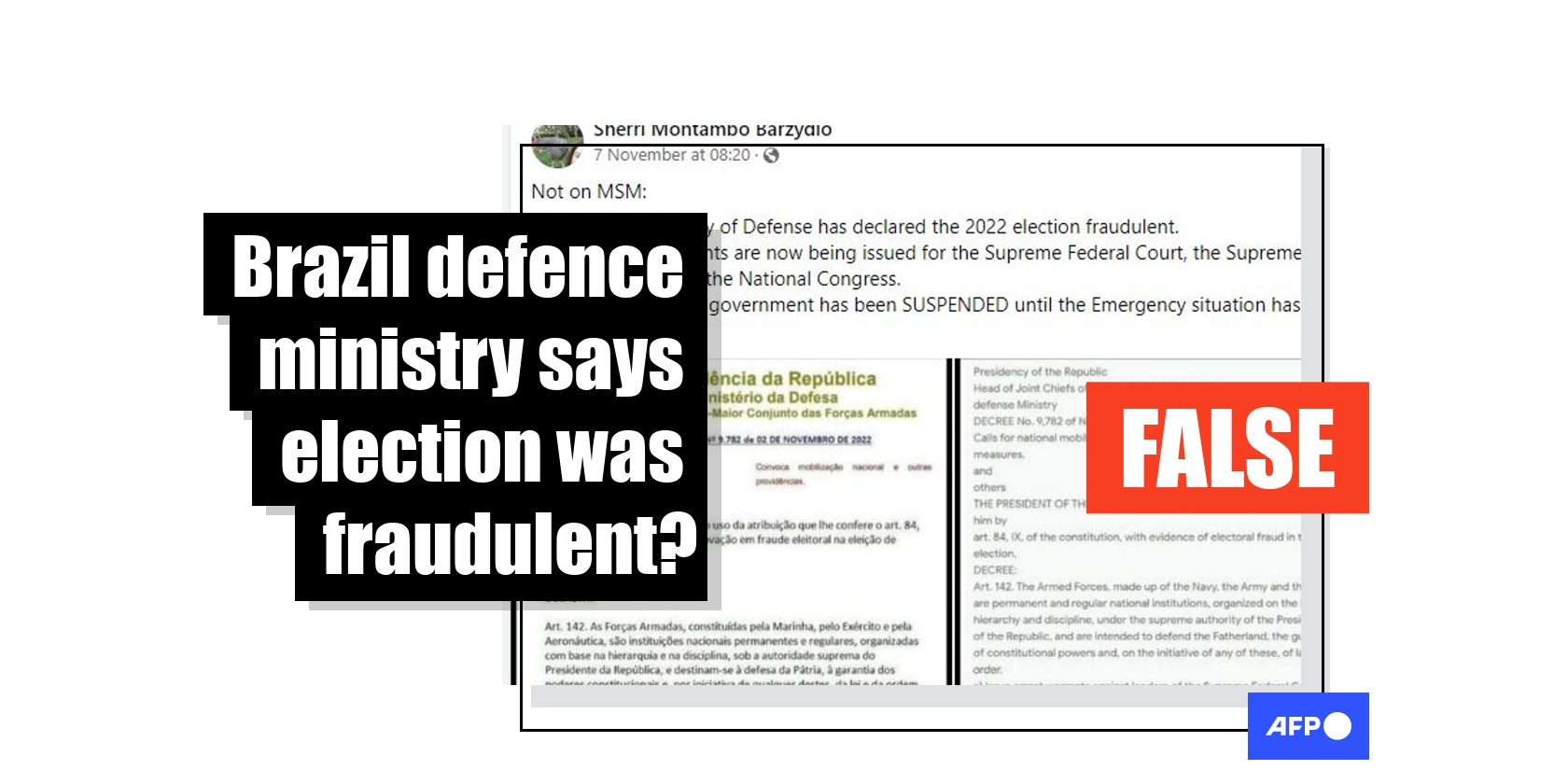 Social media posts circulating in multiple languages falsely claim that Brazil's defence ministry declared the 2022 presidential election result was fraudulent, and subsequently ordered the arrests of court officials and suspended congress. The claims surfaced after Luiz Inácio Lula da Silva defeated the incumbent Jair Bolsonaro in a runoff on October 30. However, these government agencies dismissed the claims and told AFP that they were operating as normal. Legal experts said that a clause mentioned in the false posts did not authorise one branch of government to interfere with another branch using the military.

"The Brazilian Ministry of Defense has declared the 2022 election fraudulent," reads a Facebook post shared on November 7.

The post adds that "military arrest warrants are now being issued" to the Supreme Federal Court and Supreme Electoral Court, as well as Brazil's parliament, the National Congress -- and that the government has been "suspended" pending investigation.

Bolsonaro's party called on the electoral court to reject ballots from some 280,000 voting machines, alleging errors that it said robbed their leader of re-election. But the country's top electoral authority threw out the challenge and fined the Liberal Party more than $4 million for bringing the case "in bad faith".

The Facebook post shows a document marked "Decree 9,782", which claims to invoke Article 142, ordering the arrests of court officials, suspending parliament and transferring power to the military.

The document appears to be signed by Bolsonaro and Defence Minister Paulo Sérgio Nogueira de Oliveira. 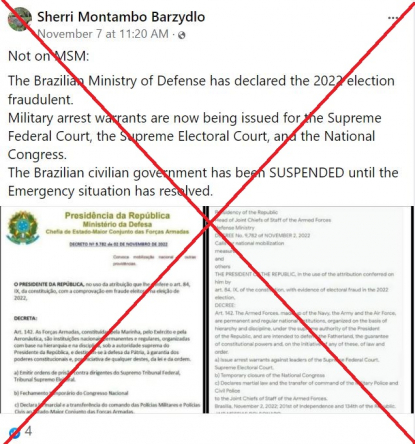 A screenshot of the false post, captured on November 24

The posts circulated on social media around the world, including in the United States, Australia and Canada.

However, the document in the posts is not a genuine government decree.

Spokespeople for Brazil's Supreme Electoral Court and National Congress told AFP on November 8 that the claims shared in the posts were incorrect.

Representatives for both houses of Brazil's parliament, known collectively as the National Congress, added that parliament was not closed and continued to work as normal.

The Supreme Federal Court referred AFP's enquiry to the defence ministry, which did not respond.

The Brazilian government's decree 9,782 -- the number listed on the fabricated document shared on social media -- related to changes in the structure of the Ministry for Women, Family and Human Rights, not military arrest warrants.

The decree was issued on May 3, 2019 by the General Secretariat, not the Ministry of Defence.

There has been no "decree 9,782" issued since the 2022 presidential election.

Furthermore, Article 142 -- which the defence ministry purportedly invoked -- is not related to military invention in government functions.

Law professor Ricardo Victalino de Oliveira from the Damásio Educacional and Clio Course said that the army could not act beyond the power of the Supreme Federal Court.

"It is impossible for the Executive Power [exercised by the outgoing president] to usurp this function of the Judiciary," he told AFP.

Renato Toledo, a doctoral student in state law at the University of São Paulo told AFP in July 2022 that the article "is part of a system of rules that provides for independence and harmony among the branches of government, without any institution being able to exercise supremacy over the others".