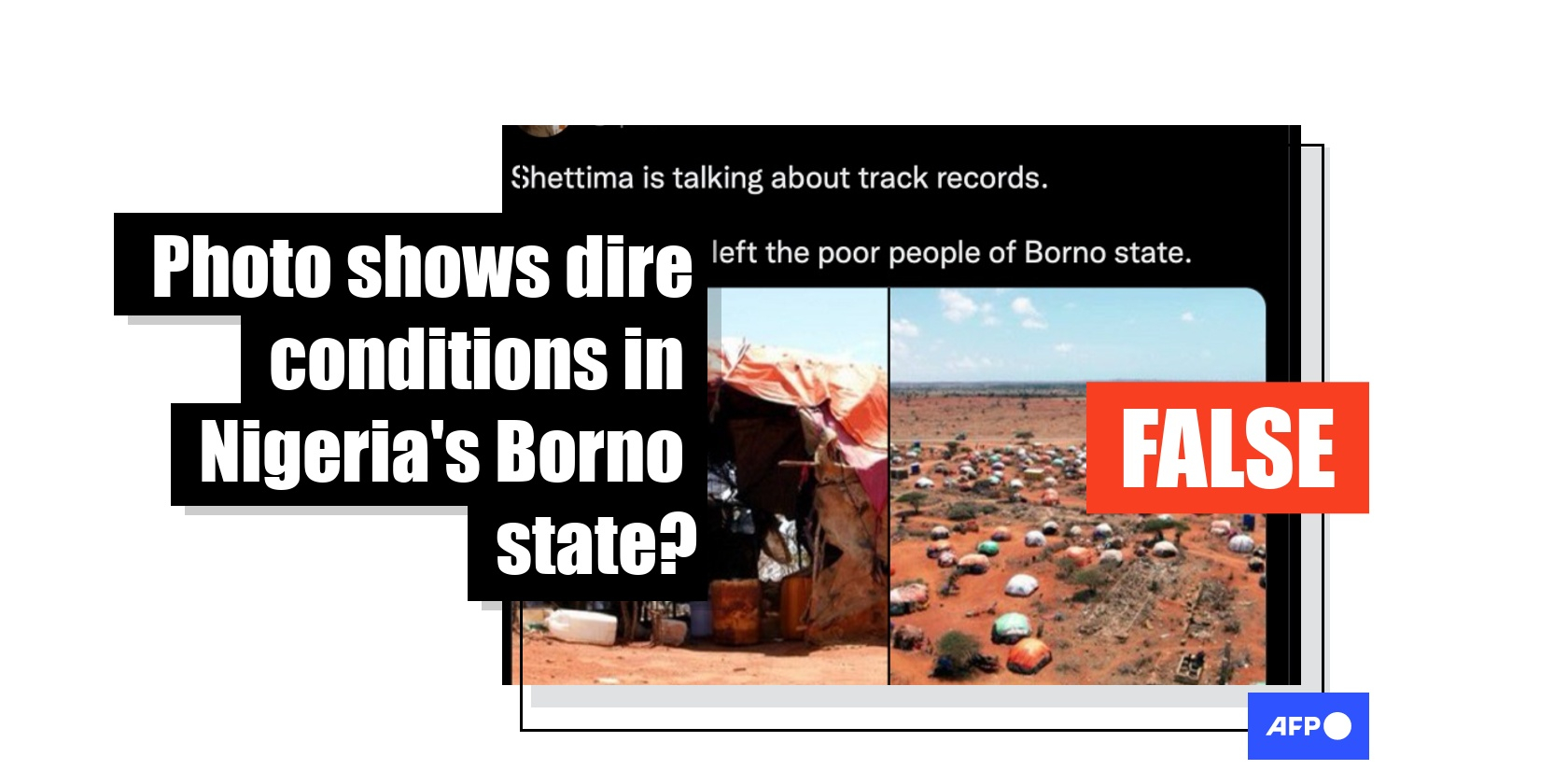 Kashim Shettima, the vice-presidential candidate of Nigeria’s ruling All Progressives Congress (APC), recently claimed at a business gathering that he and main nominee Bola Tinubu had better economic track records than their rivals. Opposition supporters responded by sharing photos purportedly showing Borno, where Shettima was governor for eight years, in a disastrous state. But the images of makeshift huts in arid bush were shared in a false context: they were taken in drought-stricken Somalia and not in Nigeria.

“Shettima is talking about track records. This is how he left the poor people of Borno state,” reads a tweet shared on November 2, 2022. 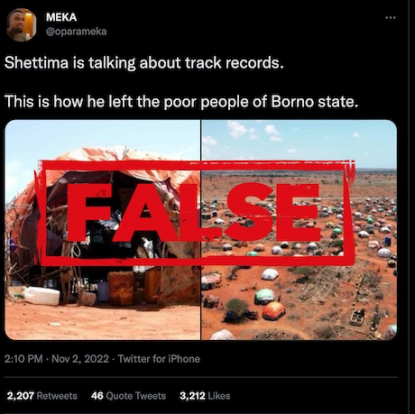 A screenshot of the false tweet, taken on November 7, 2022

One of the pictures showed an aerial view of makeshift tents, the other an up-close shot.

The tweet surfaced a day after Tinubu and Shettima spoke at a meeting with businessmen in Lagos on November 1, 2022.

Shettima used the occasion to play up Tinubu’s “track records” when he was the governor of Lagos state in southwest Nigeria from 1999 to 2007. He also took swipes at two leading opposition candidates: the People’s Democratic Party’s Atiku Abubakar and Peter Obi of the Labour party.

Shettima was governor of Borno state in northeast Nigeria from 2011 to 2019 when the Boko Haram insurgency was at its height. In 2014, the jihadist group kidnapped more than 200 schoolgirls from school dormitories in Chibok, a town in Borno.

Decade-long violent campaigns by extremists have killed more than 40,000 people and displaced over two million, most of whom are sheltering in internally displaced people (IDP) camps, as AFP has reported.

While living conditions in the Borno IDP camps are bad, the images shared on social media have no connection to Nigeria.

AFP Fact Check conductedreverse image searches and found that the images were originally published online by the United Nations (UN) and the UN Population Fund (UNFPA).

UNFPA shared the photos along with two others on Twitter on October 22, 2022—nearly two weeks before the false claim was made.

It used the images to promote its work in Somalia as part of efforts to mitigate the impact of the “ongoing drought”.

"@UNFPA is on the ground scaling up its live-saving support on sexual and reproductive health, menstrual hygiene and gender-based violence services," it said in a tweet.

⚠ Entire families with children had to leave their homes due to the ongoing drought in #Somalia.@UNFPA is on the ground scaling up its live-saving support on sexual and reproductive health, menstrual hygiene and gender-based violence services.

The same photos were shared on the UN’s Twitter handle on November 2, 2022, the same day the false claim was made. The UN repeated the information contained in UNFPA’s tweet and added a link to a donation site.

The UN said in October that Somalia was facing the worst famine in 50 years, with an estimated 7.8 million people—about 50% of the country’s population—affected by drought. 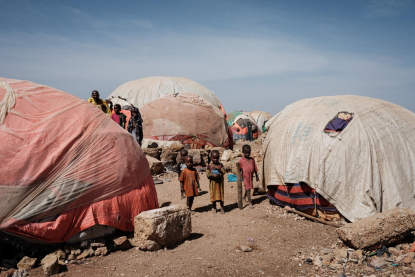 Children stand between makeshift tents woman at a camp for internally displaced persons (IDPs) in Baidoa, Somalia, on February 13, 2022. Insufficient rainfall since late 2020 has come as a fatal blow to populations already suffering from a locust invasion between 2019 and 2021, the Covid-19 pandemic. For several weeks, humanitarian organizations have multiplied alerts on the situation in the Horn of Africa, which raises fears of a tragedy similar to that of 2011, the last famine that killed 260,000 people in Somalia. Desperate, hungry and thirsty, more and more people are flocking to Baidoa from rural areas of southern Somalia, one of the regions hardest hit by the drought that is engulfing the Horn of Africa. ( AFP / YASUYOSHI CHIBA)

Baidoa and Burkahaba, two districts in Somalia’s Bay region, are projected to experience famine in November and December if assistance does not reach the people that need it most, the agency warned in October.