Skip to main content
A third-grade student holds her mother's hand while getting a Covid-19 vaccine at Michele Clark High School on November 12, 2021 in Chicago, Illinois ( GETTY / AFP / Scott Olson)

Fox News host Tucker Carlson claims a decision from the US Centers for Disease Control and Prevention (CDC) will make the Covid-19 vaccine mandatory for all schoolchildren. This is misleading; the public health agency cannot declare a national vaccination mandate for schools, as requirements are determined locally and can vary from state to state.

"The CDC is about to add the Covid vaccine to the childhood immunization schedule, which would make the vax mandatory for kids to attend school," Carlson said in a tweet published October 18, 2022. 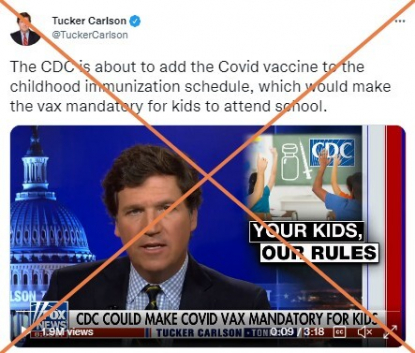 Carlson addressed the topic prior to the CDC's Advisory Committee on Immunization Practices (ACIP) meeting October 19-20. Part of that meeting's agenda was to discuss the inclusion of approved Covid-19 vaccines on the recommended immunization schedule alongside shots for polio, measles and hepatitis.

On October 19, the CDC took to Twitter to refute Carlson's claim.

But Carlson said in a tweet published the same day that he stood by his initial statement.

On his talk show, he again claimed that if the ACIP voted to add the Covid-19 vaccine to the schedule, children would "have to take that shot in order to be educated in the United States, in a public school." Referencing the CDC's response to his tweet, Carlson accused the agency of lying and said it "sets the standard and then it becomes required across the country."

The ACIP -- made up of several independent experts -- did vote unanimously on October 20 to add the Covid-19 shots to the recommended immunization schedule.

But Carlson misleads by saying this decision automatically makes the shot mandatory for children to attend school.

The ACIP helps develop recommendations for childhood vaccinations, and the CDC's schedule serves as a guideline for health departments and health care providers.

However, vaccination requirements for children attending school or childcare facilities are determined locally, according to the CDC and several health policy experts.

"CDC only makes recommendations for use of vaccines, while school-entry vaccination requirements are determined by state or local jurisdictions," said CDC spokeswoman Kristen Nordlund in an October 20 email to AFP.

The CDC's decision to add the Covid-19 vaccine to its immunization schedule is not a policy change, Norlund said, as the agency continues to recommend children get the shot.

The ACIP action "simply helps streamline clinical guidance for healthcare providers by including all currently licensed, authorized and routinely recommended vaccines in one document," she said.

Joshua Sharfstein, a professor at the Bloomberg School of Public Health at Johns Hopkins University, said: "The CDC is correct, and Tucker Carlson is wrong."

"States set the immunization requirements for school," Sharfstein told AFP on October 20. "In this process, the CDC's role is to review the evidence and make recommendations."

Multiple vaccines on the CDC immunization schedule -- including the influenza shot -- are not required in the majority of states, according to Jason Hockenberry, a professor at the Yale School of Public Health.