As Kenya’s newly-elected governors were busy at an orientation retreat, posts started circulating on social media claiming that Joseph Ole Lenku from Kajiado county had been “elected” chairperson of the Council of Governors (CoG). But the claim is false: it was in fact Kirinyaga county’s Anne Waiguru who was chosen by consensus to become the council’s new chairperson.

“Joseph ole Lenku elected the council of governors chairperson (sic),” reads part of a post published on Facebook on September 16, 2022. 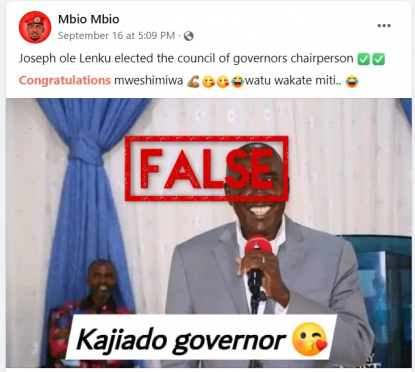 In Kenya’s general elections on August 9, 2022, 47 governors were chosen by ballot across the country to serve as the heads of their counties for five years.

The newly elected governors and their deputies attended a three-day induction retreat on September 15, 2022.

The CoG secretariat explained to AFP Fact Check that the process of selecting the council’s chairperson has often been done by secret ballot or a majority vote among the elected members. Waiguru was picked by consensus.

“The members held discussions among themselves and agreed to give the position to one of the two fronted candidates,” said the CoG secretariat.

The CoG comprises all Kenyan governors from 47 counties. Its functions include providing a mechanism for consultation amongst the county administrations, sharing information on the performance of the counties, and facilitating capacity building for county heads.

The same claim also appeared here and here on Twitter.

Ole Lenku was not picked as the CoG’s new chairperson.

According to information on the council’s official website and social media pages, Kirinyaga county governor Waiguru was picked by a majority of her colleagues on September 17, 2022, to lead the council.

Her counterpart from Wajir county Abdullahi Ahmed will serve as deputy.