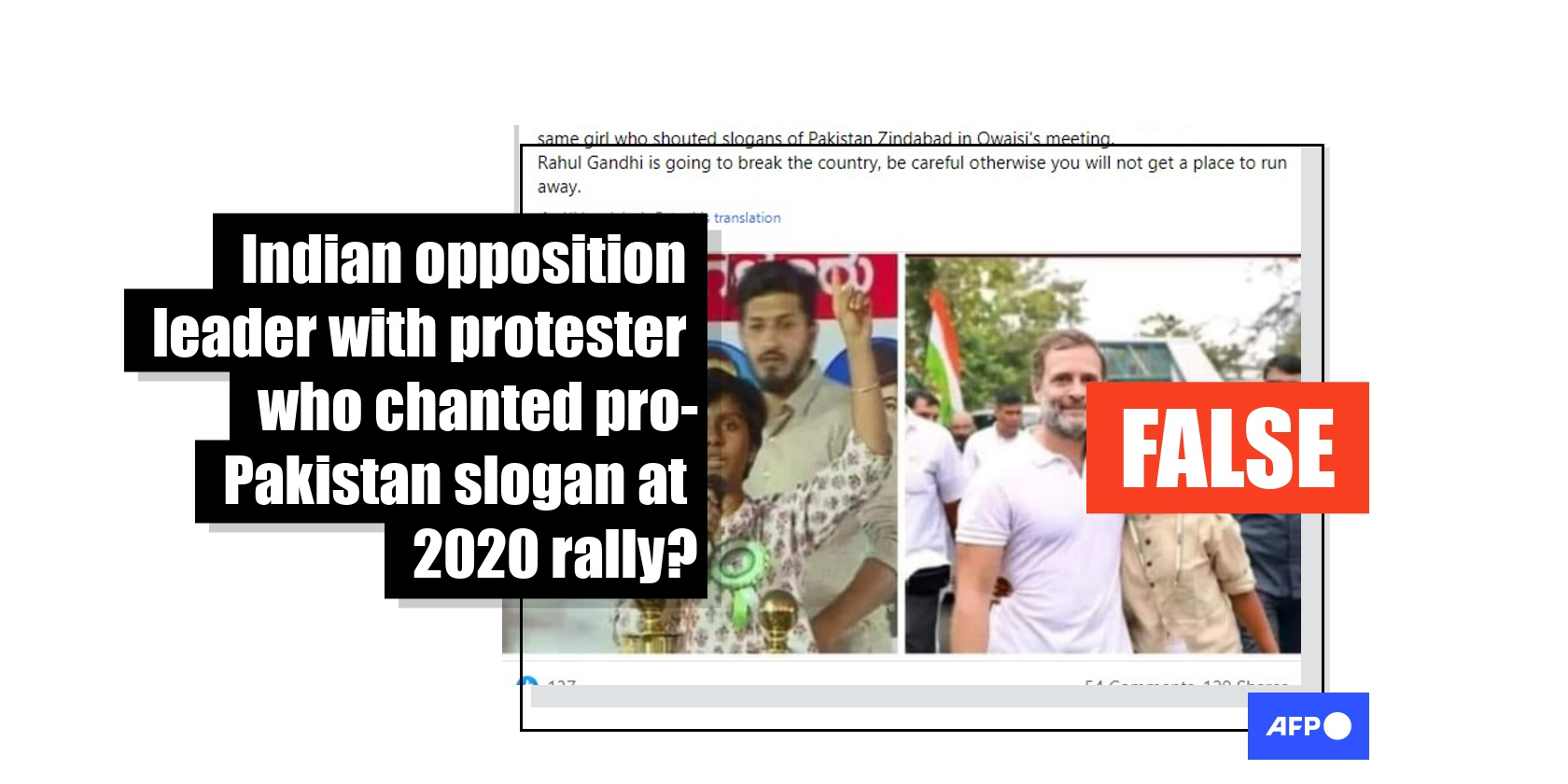 Two photos have been shared thousands of times on social media alongside a claim that they show Indian opposition leader Rahul Gandhi with Amulya Leona, an Indian protester who became infamous for chanting a pro-Pakistan slogan at a rally in February 2020. This is false. The woman seen with Gandhi is Miva Jolly, a student leader from the south Indian state of Kerala.

The images were posted here in a Facebook group called ‘We support BJP India’ on September 26, 2022.

In the first photo, a woman can be seen speaking at a lectern.

In the second photo, a woman can be seen embracing Rahul Gandhi, leader of the opposition Congress party, during a march.

The post's Hindi-language caption translates to English as: "Hindus of the country, open your eyes and look at the girl whom Rahul Gandhi is embracing, this is the same girl who raised slogans of ‘Pakistan Zindabad’ in Owaisi's rally.

"Rahul Gandhi is going to break the country, be careful or else there will be no place to escape." 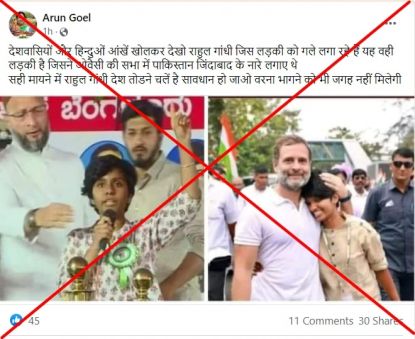 The post suggests the woman in both photos is Amulya Leona, a student protester who was detained by police for chanting "Pakistan Zindabad" (Long live Pakistan) at a rally in the southern Indian city of Bangalore in February 2020.

The demonstration was organised by the opposition leader Asaduddin Owaisi, chief of the All India Majlis-e-Ittehadul Muslimeen (AIMIM) party, against the government's controversial Citizenship Amendment Act (CAA). It gives citizenship to refugees in India, but not if they are Muslim.

The images were shared alongside a similar claim on Facebook here and here and on Twitter here.

However, the claim is false. The photos show two different women.

A reverse image search on Google found the same photos in a tweet by K C Venugopal, another Congress leader and member of parliament, on September 24.

In response to the posts circulating online, Venugopal wrote that the second photo actually shows Rahul Gandhi with Miva Jolly, a 25-year-old student leader from the south Indian state of Kerala.

“Perturbed by the stupendous success of #BharatJodoYatra, BJP’s Dirty Tricks Department is working overtime," he wrote.

Jolly is a student of engineering at APJ Abdul Kalam Technological University in Kerala, and the district secretary of KSU, a student organisation.

"I live in an area called Thevakkal in Ernakulam district. When I entered the Bharat Jodo Yatra Ernakulam district on the 21st, I got the opportunity to walk together with my beloved Rahul Gandhi on Aajatha and take a photo with him.”

Below is a screenshot comparison of the second photo in the false posts (left) and Jolly's Instagram post (right): 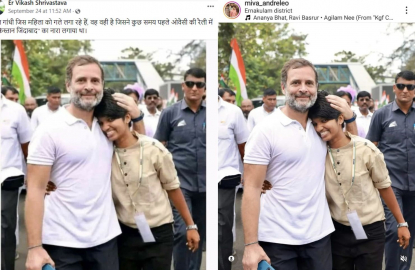 Jolly told AFP: "My picture is being shared with the false claim that since my hairstyle is very similar to that girl. Right-wing and anti-Congress people are running their agenda. They are doing such acts out of fear of this march by Rahul Gandhi."

At the 2020 rally, police booked Amulya Leona under sedition charges of the Indian Penal Code (IPC).

Below is a screenshot comparison of Amulya Leona's image in the false post (left) and an image posted on her social media (right):