A video of a car repeatedly crashing into a group of people has been viewed hundreds of thousands of times in posts that claim the driver ran over health workers locking down a central China neighbourhood following new Covid restrictions in September 2022. However, the claim is false -- the video was filmed in southern China in September 2015, more than four years before the Covid-19 pandemic started.

The video was posted here on Twitter on September 6, 2022 and shows a motorist repeatedly ramming into a group of people before driving away.

"The Communist Party's usual trick: use the people to fight the people. [During] a neighbourhood lockdown, an angry business owner runs over the 'shackles' with his car," reads the simplified Chinese caption, suggesting the driver was attacking local health workers in charge of a Covid-19 lockdown.

The post also included hashtags relating to Chengdu, a city of 21 million in China's central Sichuan province effectively shut down since September 1 as authorities raced to snuff out a new Covid-19 outbreak, AFP reported. A screenshot, taken on September 8, 2022, of the misleading post.

The same video has been viewed more than 588,000 times alongside a similar claim on Twitter, Gettr and Facebook.

Another version of the claim suggests the incident took place in Daqing, a city in northern China's Heilongjiang province which has also been placed under lockdown to control a Covid-19 outbreak since late-August, state media reported.

China is the only major global economy sticking to a zero-Covid policy, with lockdowns, travel restrictions and mass testing remaining commonplace.

Some users expressed sympathy toward the driver in the video. "This is not an act of revenge on society," one user said. "Those people deserve it."

"Such acts of revenge will continue to happen, as long as the zero Covid policy remains in place," another said.

However, the video predates the Covid epidemic and was actually taken in 2015 in the southern Guangdong province.

A combination of reverse image and keyword searches on Google found the same video published on the Chinese news site Sina video on September 15, 2015.

The report said the car was driven into several people after a fight broke out at a food stall in Puning city in Guangdong, injuring at least two people.

Below is a screenshot comparison of the video in the misleading video (left) and Sina's video (right): 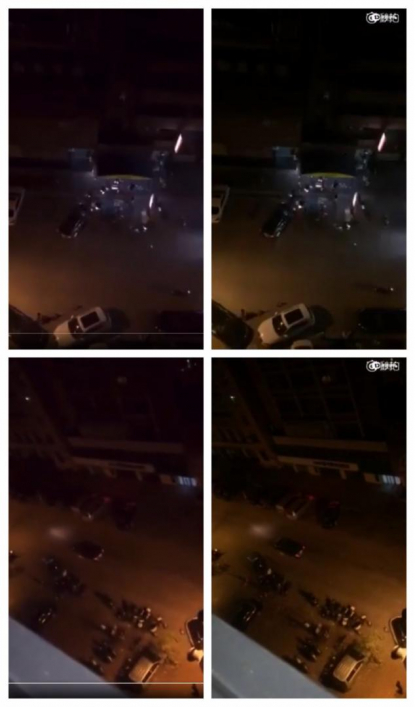 A screenshot comparison of the video in the misleading video (left) and Sina's video (right).

Local news organisation Southern Daily also covered the incident, saying that the man was attacked after arguing with others at the stall in the early hours of September 14, 2015.

He then drove his car into his attackers before driving away. No one was killed in the incident, the report said.