Social media users in Malaysia have shared an image that they claim shows prison officers waiting to take the country’s former prime minister Najib Razak to jail on August 23, 2022, when the top court rejected his appeal against a 12-year sentence for corruption. However, the claim is false. The photo was shared in 2015 -- seven years earlier -- in posts that say it shows prison officers transferring jailed opposition leader Anwar Ibrahim to a hospital in Kuala Lumpur.

It shows a man wearing a helmet and a jacket that reads "Prison" in Malay standing next to a motorcycle and watching a black car pull into an entranceway.

The post’s caption, written in Malay and English, states: “Prison officers already standby outside the court. Get your camera ready folks. This may be the day Najib almost got away.! This may be the best Independence Day present to our nation!" 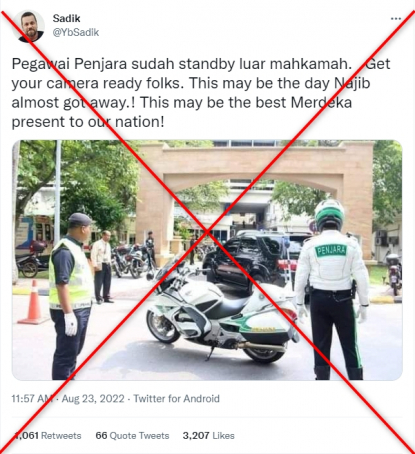 It circulated on the same day that Malaysia's highest court upheld former prime minister Najib Razak's 12-year jail sentence for corruption in the 1MDB financial scandal, saying his appeal was "devoid of any merit".

According to Malaysian newspaper The Star, Najib was sent from the Federal Court to the Kajang Prison.

A lower court had earlier sentenced Najib after finding the former prime minister guilty of abuse of power, money laundering and criminal breach of trust over the transfer of 42 million ringgit ($10 million) from SRC International, a former unit of state fund 1MDB, to his personal bank account.

A reverse image search on Google and subsequent keyword searches found the photo was shared on Facebook here on June 2, 2015, by Wan Azizah Wan Ismail -- a Malaysian politician who would later become deputy prime minister in 2018.

DSAI refers to her husband, the opposition leader Anwar Ibrahim, with his honorifics Dato Seri, while HKL refers to Kuala Lumpur Hospital.

Anwar, then serving a jail sentence for sodomy, was transferred from the Sungai Buloh Prison and admitted to the hospital for medical treatment, as reported by The Sun Daily, a local newspaper, on the same day.

AFP geolocated the picture to this spot at Kuala Lumpur Hospital, which was captured in November 2015 via Google Maps.

Below is a screenshot comparison of the picture in the misleading post (L) and the location on Google Maps dated November 2015 (R), with similarities highlighted by AFP:

Nanyang Siang Pau, a Chinese-language newspaper in Malaysia, also shared the same photo in a Facebook post about Anwar's hospital admission on June 2, 2015.

The picture was also used in a Facebook post from the Seremban Prison on February 6, 2020, titled: "Malaysian Prison Department's Motorcycle Escort Unit."