A video has been watched tens of thousands of times in social media posts that claim it shows a cloudburst over a Pakistani city as monsoon rains wrought havoc on the country's Sindh province in August 2022. However, the video has been shared in a false context; it was actually filmed in Australia in February 2020. 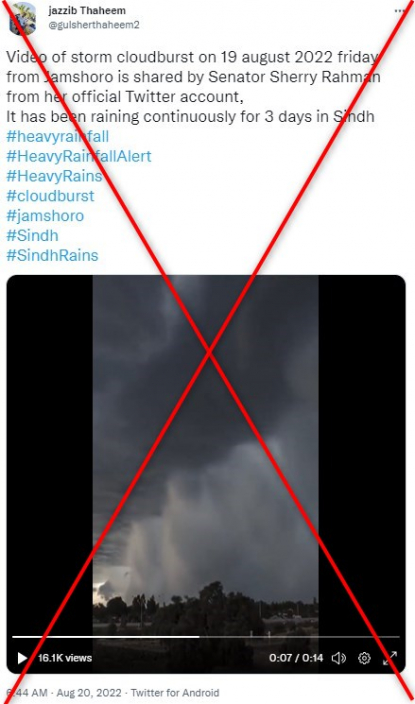 Jamshoro is a city in Sindh province, in southern Pakistan.

The video, which she credited to the Pakistan Meteorological Department (PMD), had garnered more than 12,400 views before it was deleted.

The clip also appeared alongside a similar claim elsewhere on Twitter, as well as onYouTube and Facebook.

The posts circulated as rains wrought havoc on Sindh province in mid-August 2022, as reported by local media here and here.

Pakistan's monsoon season -- which typically lasts from June to September -- has not only brought widespread damage to homes and infrastructure but also killed over 300 people this year, AFP reported.

A reverse image search on Google led to this video, posted by Kane Artie, a landscape photographer based in Australia, on February 25, 2020.

"Well this afternoons front that rolled in was something else! I made a last minute dash down the road to the viewing area at the Perth Airport as I knew I would have a nice open area to shoot. So glad I did," the post's caption reads.

"I made a last minute dash down the road to the viewing area at the Perth Airport as I knew I would have a nice open area to shoot.

"I got absolutely drenched running back down the ramp, and nearly got blown over with the gusts that came through. I had to hang on to the fence to stay on my feet. Was it worth it..... Hell yes. Media licensing available via Severe Weather Australia".

Below are screenshot comparisons of the video in the misleading post (left) and the genuine video from Artie (right), with same features highlighted by AFP: 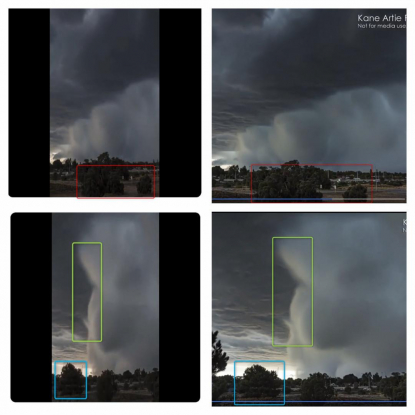 The video previously circulated with with a false claim that it showed rain clouds in South Korea -- which AFP debunked here.

At the time, Daniel Shaw -- the national news director of Severe Weather Australia, which holds the video's publishing rights -- told AFP that it "was captured on 25th Feb 2020 by our contributor Kane Artie in Perth, Western Australia".

On August 20, 2022, Rehman said she was misled by the Pakistan Meteorological Department about the video and had taken down the false post.

In a reply tweet the following day, the PMD apologised for "providing with the wrong information regarding Jamshoro".