A video of Rahul Gandhi, the de facto head of India's main opposition party, criticising "the entire Indian infrastructure" has been viewed thousands of times in social media posts calling him unpatriotic. However, the clip, which was amplified by members of the ruling Bharatiya Janata Party (BJP), was taken out of context. Gandhi was in fact replying to a question at a press conference in which he accused the BJP of taking over the country's law enforcement agencies, judiciary and media.

The four-second video shows Indian National Congress politician Rahul Gandhi saying in Hindi: "We are against the entire Indian infrastructure".

The clip was shared in a tweet on August 5 by the BJP's Delhi treasurer Visshnu Mittal, who wrote: "It is natural Rahul Gandhi that you do not like the development of the country.

"Why would the person who signed the MoU (memorandum of understanding) with China like India's infrastructure?

"If you continue to fight against India, your importance will only degrade and your presence won't matter to the country."

The BJP has in the past criticised its rivals in the Congress party over an agreement it signed with the Chinese Community Party in 2008. 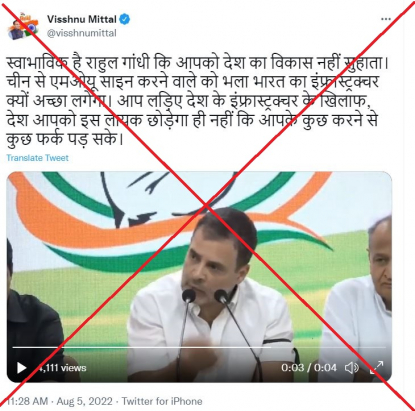 The video was viewed more than 100,000 times in tweets posted by other BJP members, including Amit Malviya, head of the party's information and technology department, Priti Gandhi, ex-social media head for the party's women's wing Mahila Morcha, and the party's Maharashtra state wing.

The clip also circulated on Facebook here and here.

Some social media users accused Gandhi of being unpatriotic.

"These politicians are the agents of China," one commented.

Another wrote: "Congress reflecting and showing the power of their black money."

A keyword search found the clip was taken from a press conference on August 5.

Below is a screenshot comparison of the clip in the misleading post (left) and in the YouTube video (right):

The press conference was held hours before police detained Gandhi and several other Congress politicians at a protest in Delhi, where they had gathered to march against price rises and unemployment.

The clip was taken from an answer that Gandhi gave in response to a reporter who asked: "Why do you think the opposition is not being able to pressurise the government with protests. Why is the government not taking corrective measures?"

Speaking from the 11:30 mark of a YouTube video of the press conference, Gandi accuses the BJP of installing its own members in India's legal, judicial and electoral structures and the media in order to influence them.

He continues: "So, we are not fighting a single political party, we are fighting against India’s entire infrastructure.

The ED (Directorate of Enforcement) is an agency that probes economic offences, while the CBI (Central Bureau of Investigation) is India's federal investigative agency.

Several Congress members and their allies have reportedly (here, here and here) been investigated by the ED and CBI in recent months.