A video has been viewed tens of thousands of times on Facebook alongside a claim it shows students in Muslim-majority Bangladesh being "indoctrinated" with Hindu values. This is false: the video was filmed at an Islamic school in neighbouring Hindu-majority India -- not in Bangladesh. The students were chanting a song about the world's major religions, which the school told AFP is about religious tolerance.

The post's Bengali-language caption translates to English in part as: "In a 90 percent Muslim country, schools and madrassas have been indoctrinated with Hindutva."

Bangladesh's population is more than 90 percent Muslim, according to a recent census. 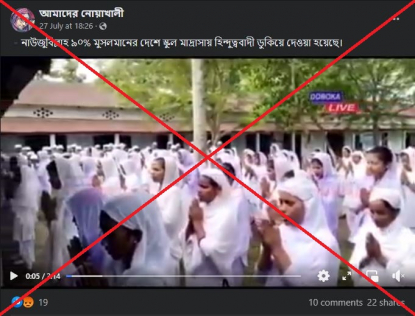 The same video was shared alongside a similar claim here and here.

The video includes the logo "DOBOKA LIVE". A Google keyword search found it posted on June 4, 2022 on a Facebook page with the same name.

Doboka is a town in India's northeastern Assam state.

The Facebook post's caption reads: "A scene from the prayer meeting of Islampur Block Senior Madrassa".

Below is a screenshot comparison of the video in the false posts (left) and the video from DOBOKA LIVE (right):

The school building shown in the video corresponds with an image of the Islampur Block Senior Madrassa geotagged in Assam's Lakhimpur district on Google Maps.

Below is a screenshot comparison of the video (left) and the image on Google Maps (right):

An Assamese-speaking AFP journalist analysed the video and found the prayer heard in the clip translates to English as: "You are the most merciful, soul of the world. You are Allah, you are Jesus, you are Bhagvan."

"Bhagvan" is an epithet within Indian religions -- including Hinduism -- for figures of religious worship.

In response to the false posts, Abdul Aziz, head of the Islampur Block Senior Madrassa, told AFP: "It's a prayer song comprising the names of the God in three major religions. It's not about Hinduism (Hindutva), rather than about religious tolerance."