A video of Kenyan President Uhuru Kenyatta addressing a crowd in his mother tongue, Kikuyu, has been shared on Twitter alongside a supposed translation claiming he admitted his deputy William Ruto would win the presidential election on August 9. The claim is false; a correct translation of Kenyatta’s speech reveals that he did not make such remarks. In fact, he was urging voters from his home turf to vote for Ruto’s main opponent, veteran politician Raila Odinga, who he has publicly endorsed.

On August 1, a Twitter account with 1.7 million followers shared a video of Kenyatta addressing a crowd by a roadside in Gatundu, a town in central Kenya, where he had commissioned a government dam project. He was speaking in vernacular.

The tweet’s text reads: “President Uhuru Kenyatta publicly admits that DP William Ruto will win the August 9, Elections. He, however, wrongly, predicts that WSR (William Samoei Ruto) will not be accessible once in State House. (Just like he was). Importantly, The win is loading…Freedom is coming (sic)”. 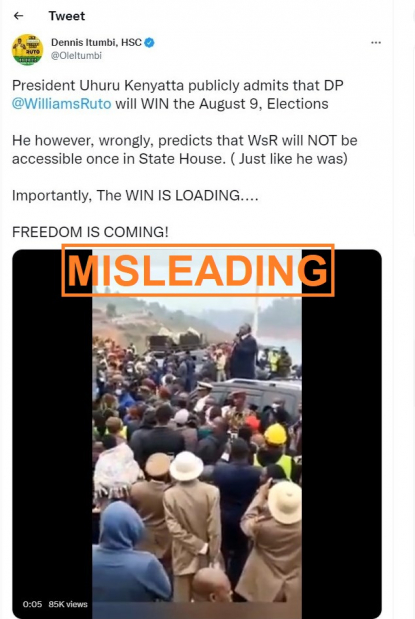 A screenshot of the misleading tweet, taken on August 5, 2022

The video has since been viewed more than 80,000 times and retweeted over 700 times.

AFP Fact Check translated Kenyatta’s speech and found that he did not say Ruto would win in next week’s polls.

Kenyatta was warning residents of Gatundu against voting for Ruto, arguing that the deputy president was making them empty promises.

“They say, ‘we are the hustlers, the real deal, we will help you’. Ask yourself, what are they giving us? When they get to the state house, you will see nothing,” Kenyatta said.

Additionally, multiple local news reports about Kenyatta’s speech made no mention of him admitting that Ruto would win (here, here and here).

Ruto, 55, is among four presidential candidates vying to be Kenya’s fifth president.

He was previously cast as presidential successor but his ambitions were thwarted when Kenyatta made peace with long-time rival Odinga in 2018.

The outgoing head of state is now the chairman of Odinga’s political party, the Azimio La Umoja Coalition. With only three days to the elections, incorrect translations of politicians’ vernacular speeches have become a trend, with AFP Fact Check debunking another case here.