Skip to main content
This photograph taken on December 2, 2021, shows a sign of the the World Health Organization (WHO) next to theirs headquarters, in Geneva. ( AFP / Fabrice COFFRINI)

WHO rejects claim it has been 'expelled from Russia'

Social media posts shared hundreds of times in Australia, the United Kingdom and the United States falsely claim Russia has expelled the World Health Organization (WHO) from the country and closed the agency's offices in the capital Moscow. A WHO spokesperson told AFP the health agency "continues to operate" in Russia. As of August 9, AFP did not find any official reports indicating the WHO was expelled from Russia.

The screenshot includes a picture of WHO chief Tedros Adhanom Ghebreyesus, with superimposed text that reads: "#Russia expels World Health Organization and closes its offices in Moscow".

"Well done Russia...." reads the post's caption to the screenshot. 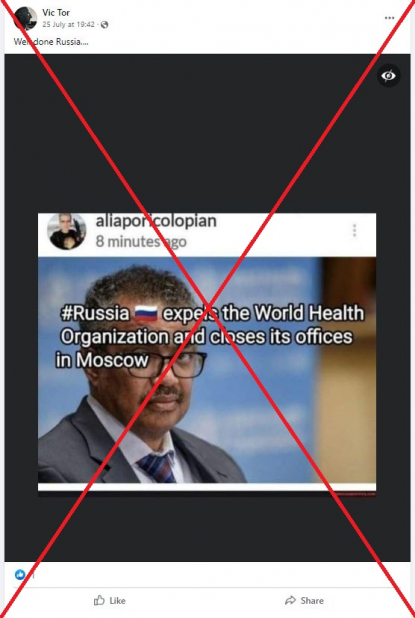 The posts also featured the screenshot appearing to show the account "aliaporicolopian".

Keyword searches on multiple social media sites did not find any account with that name.

Responding to the posts, a spokesperson at the WHO's European Regional Office told AFP on August 4: "At this time, WHO continues to operate a country office in Russia, as well as a regional office focusing on non-communicable diseases."

The WHO country office in Moscow was established in 1998, while the WHO European Office for the Prevention and Control of Noncommunicable Diseases (NCD Office) was opened in 2014.

In May, the WHO's decision-making body for the European region passed a resolution requesting the regional director explore options to safeguard the work of the NCD Office -- including relocating the office out of Russia.

The WHO spokesperson told AFP that the matter is still "under advisement".

"The Russian invasion of Ukraine has been a matter of great concern to the WHO membership as a whole, with all WHO member states passing a resolution at the World Health Assembly (a short while after the Europe Regional Committee meeting) criticizing the invasion and its damaging impact on health in Ukraine," the spokesperson added.

The Kremlin-backed broadcaster RT reported on May 17, 2022 that proposals to end Russia's membership of international organisations, including the WHO, had been sent to parliament for discussion.

However, the official Twitter account of the Russian Mission to the United Nations and other international organisations in Geneva posted on May 22, 2022 that rumours the country would withdraw from the WHO were "simply not true".

Russia will actively participate in the upcoming 75th World Health Assembly, which begins on May 22, aiming for productive work with our international colleagues to address global healthcare issues

❗️ As for rumors that Russia will withdraw from @WHO - they are simply not true pic.twitter.com/CVfI0YNjDy

As of August 9, Russia is still listed as a member country of the WHO.