A photo has been shared hundreds of times in social media posts that claim it shows the new leader of India's western Maharashtra state as a young man, when he drove a motorised rickshaw to make ends meet. However, the claim is false; the photo shows an activist for rickshaw drivers' rights.

It appears to show a man standing next to an auto-rickshaw -- a motorised vehicle common in India and other South Asian countries -- which has a vehicle registration number from India's western Maharashtra state.

The caption, written in both Hindi and English-language, reads: "Life can change anytime. [It] can even make an auto driver the chief minister of Maharashtra. Both these pictures are of Eknath Shinde of Maharashtra. Never loose (sic) your hope. Always work hard."

Eknath Shinde used to drive an auto-rickshaw to make ends meet before he became the current chief minister of India's richest state. 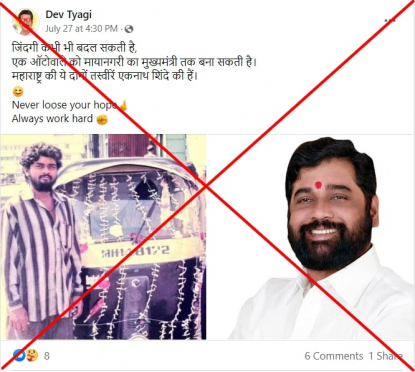 Local media reported that a faction led by Shinde had rebelled against Thackeray, who they accused of deviating from the right-wing party’s ideology by forming a government with its rivals from the Nationalist Congress Party and the Indian National Congress.

Shinde and his supporters have formed a new alliance with the country’s ruling Bharatiya Janata Party.

The image was shared alongside a similar claim on Facebook here and here; and on Twitter here.

However, the claim is false; the photo in fact shows an activist for auto-rickshaw drivers' rights.

A reverse image and keyword search on Google found the photo posted by Facebook users here and here on July 22 and 25, 2022.

Both identify the man in the photo as Baba Kamble, the founder of the Maharashtra Rickshaw Panchayat, a group that advocates for the rights of auto-rickshaw drivers.

The Marathi-language caption of the post from July 22 translates as: "Photo of Maharashtra Rickshaw Panchayat founder and president Baba Kamble with his rickshaw in 1997. He is blessing his rickshaw during the holy month of Shravan at the Pimpri Rahatrani rickshaw stand."

Pimpri Rahatrani refers to a suburb in Pune, a city in Maharashtra state.

Shravan, also called Sawan, is the fifth month of the Hindu calendar and is considered the holiest month of the year.

Below is a screenshot comparison of the photo in the false posts (left) and the posts identifying Baba Kamble (right): 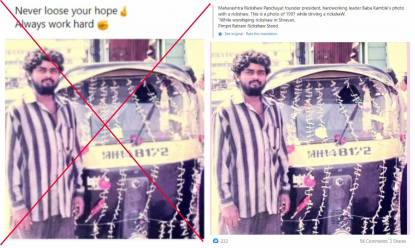 Kamble told AFP on July 29 that he was the man in the photo.

"This is my picture from 1997 when I used to drive an auto-rickshaw," Kamble said.

He explained that rickshaw drivers all over Maharashtra state decorate their rickshaws to celebrate the holy month of Sawan and said that he had also done so at the time.

Kamble said it was likely the photo spread after a local Marathi-language newspaper, Lokmat newspaper, interviewed him about rickshaw drivers rising to success from ordinary backgrounds.

He had shared the newspaper clipping on Facebook here on July 25.