Footage of a car being swept away by floodwaters has been viewed more than a million times in Indian news reports and social media posts about a journalist who drowned while covering heavy monsoon rains that inundated the subcontinent's southern Telangana state. Whilst police in Telangana's district of Jagtial told AFP that a journalist drowned in the flood, the clip has been shared in a false context. It has circulated online since September 2020 in posts about a vehicle being swept by flooding in neighbouring Pakistan. The video also includes other elements that indicate it was filmed in Pakistan, including a vehicle with a Pakistani license plate, as well as someone speaking in Urdu-language.

The video was shared on July 13 on a YouTube channel for local news organisation 14 TV Telugu.

Its caption states in part: "TV reporter away [sic] in flood water in Jagtial".

The post circulated online after police in the city of Jagtial said a journalist drowned while reporting on floods in Telangana. Local media reported on the incident here. 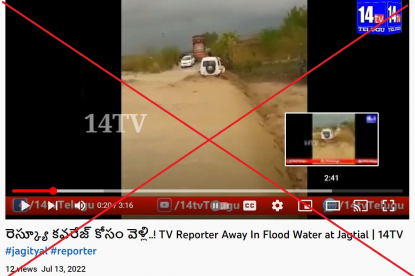 Several Telangana-based media outlets published the video in recent reports about flooding in the state, including 14tv Telugu and TV45 Telugu.

Comments indicate some social media users were misled by the posts and reports.

One wrote, "NTV journalist will be missed."

Another said, "Telangana chief minister warned against doing such acts during rains."

The video, however, predates the journalist's death in Telangana.

The report says the accident happened in the district of Harnai in Pakistan's sparsely-populated Balochistan province.

The Urdu-language caption translates to English as: "Breaking News: There are reports of a dam burst in Harnai. There is a flood in the town. Flood water has turned towards Sibbi, the local population is at risk."

Below is a screenshot comparison of the video in the false posts (left) and the footage published by Daily Jiddat Karachi (right): 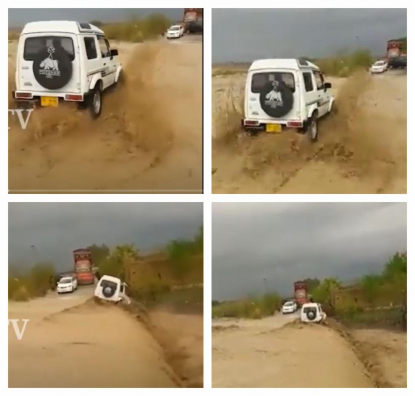 A person in the clip can be heard speaking in Urdu-language. Their comments translate to English as: "Has he survived? Leave it, he is gone."

The vehicle in the video has the registration number "BE 9119", as shown below: 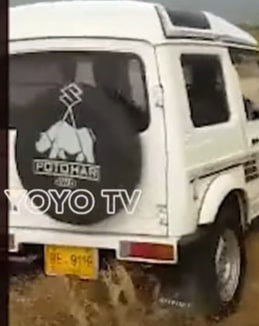 AFP ran a search on a Pakistan government database of vehicle registrations and found "BE 9119" listed in the country's Sindh province, which neighbours Balochistan.

Below is a screenshot of the vehicle's registration details: