An image purporting to show Russian President Vladimir Putin watching news about a key by-election in Pakistan won by the opposition Pakistan Tehreek-e-Insaf (PTI), led by ousted Pakistan prime minister Imran Khan, has been shared hundreds of times in social media posts that claim the Russian leader was satisfied by the party's victory. However, the image has been doctored from a photo of Putin speaking with Italian executives during a teleconference in January 2022.

"Russian President Vladimir Putin is watching the news about the July 17 breakthrough in Pakistan. Expressing his satisfaction over the victory of Imran Khan he has declared Imran Khan a wonderful personality," reads the Urdu-language caption of a photo shared on Facebook here on July 20, 2022.

It has been shared more than 900 times.

The "July 17 breakthrough" appears to refer to the victory of the opposition Pakistan Tehreek-e-Insaf (PTI) -- the party of former prime minister Imran Khan -- in the Punjab state assembly by-elections.

The by-elections -- which saw the PTI win 15 of the 20 seats up for grabs -- were seen as a popularity test for Khan, who was ousted by a no-confidence vote in April. 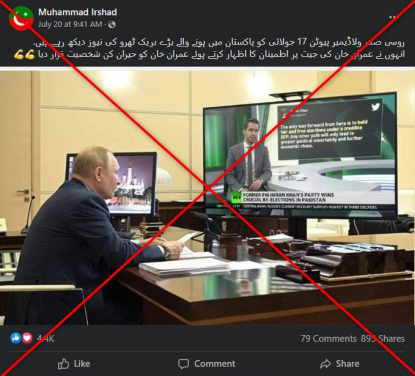 Comments on the posts suggested some social media users believed the picture was genuine.

"Yes, he is an amazing person," wrote another user.

The picture, however, has been altered from a photo showing Putin speaking with Italian business executives.

A reverse image search on Google found the original, unedited photo published here on the website of European media outlet EURACTIV on January 26.

"Russian President Vladimir Putin speaks online with representatives of Italian firms, on 26 January 2022," reads the caption of the photo, which is credited to the Kremlin.

Below is a screenshot comparison of the photo in the misleading posts (left) and the unaltered photo (right):

The report on the EURACTIV website says that Putin had held a virtual meeting with top Italian executives.

"Energy firm Enel, insurer Generali and tyre manufacturer Pirelli were all confirmed to take part in Putin’s online meeting with the Italian-Russian Chamber of Commerce, with Unicredit bank also reported to be attending.

The photo has also been added to AFP's photo archive here.

Its caption reads: "Russia's President Vladimir Putin chairs a meeting with Italian businessmen via a video conference at the Novo-Ogaryovo residence outside Moscow, on January 26, 2022. Alexey NIKOLSKY / Sputnik / AFP".

The photo was also published on the website of European television news network Euronews here on January 26, alongside a report about the virtual meeting.

The image of a news report that was inserted into the photo of Putin's teleconference was taken from Russian state TV channel RT.

AFP traced the image to the bulletin that ran on July 18, 2022 between 2 pm and 2:30 pm EDT, available here on the Internet Archive.

The anchor in the broadcast reported that Khan had called for "fair and free early elections" in Pakistan, while the former leader's tweet is displayed on the screen behind him.

Below is a comparison of the zoomed in image in the altered picture (left) and a screenshot of the RT News broadcast as seen on the Internet Archive (right):

AFP has found no official reports about Putin commenting on the by-election as of July 24.