Skip to main content
Sara Duterte, daughter of former president Rodrigo Duterte, is congratulated after being proclaimed winner of the vice presidential race on May 25, 2022. ( AFP / JAM STA ROSA)

Facebook posts shared hundreds of times in the Philippines purport to contain advice for public school teachers from Philippine Vice President Sara Duterte on how to handle inadequate classroom resources. The daughter of former Philippine president Rodrigo Duterte became head of the archipelago's education department after she was sworn in last month. But AFP found identical advice in Tagalog-language was shared by a Filipino Facebook user six years before Duterte's appointment as education chief. The original post was also edited to insert an image of Duterte standing at a pulpit at an event in early July 2022, during which she made no such comments.

The image featuring the purported advice from Sara Duterte was shared on Facebook on July 11.

It has been shared more than 200 times.

The Tagalog-language text translates in part as: "A request for public school teachers.

"If you think that equipment inside your classrooms is lacking, please don't pass the burden of acquiring these to parents. A classroom cannot be called a room for studying if it doesn't have a blackboard or a whiteboard.

"Please approach your school's principal and pin your hopes on them, not the parents. The school principal knows how to acquire these equipment because there's a budget for these from the Department of Education and the local school board...

The post's caption states: "This is our real [vice president]". Duterte was named secretary of the Department of Education by President Ferdinand Marcos Jr in May 2022.

A similar graphic was also shared on Facebook here, here, here and here.

"It's only now that we're hearing something like this from a [Department of Education] secretary. Cheers to you madame VP", one said.

"Thank you for this, ma'am, us parents will no longer be saddled with this problem", said another.

Multiple keyword searches on Facebook found the original Tagalog-language text in the post was shared here on June 11, 2016 -- six years before Duterte was named education chief.

It was published by a Filipino man named Danny Alejandrino who used to lead an online volunteer group in the Philippine city of Bacoor.

The post does not include a photo of Duterte or the words "Sara Duterte". 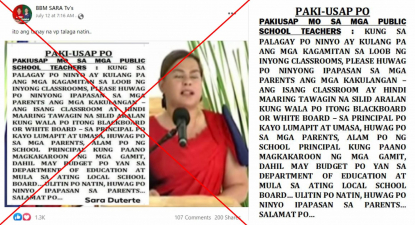 It was later doctored to insert Duterte's name and add an image of her taken at a Department of Education event on July 4.

Below is a screenshot comparison of the misleading Facebook post (left) and an image of Duterte at the Department of Education event (right):

A review of Duterte's comments at the event in July found she did not make any of the comments cited in the misleading posts.

Philippine media organisations the Philippine Star, GMA News and Inquirer reported on the event and made no reference to the purported comments in the Facebook posts.

The doctored graphic was also debunked by Philippine broadcaster ABS-CBN.