Several photos have been shared repeatedly in English and Korean-language posts that claim they show how Saudi Arabia treated world leaders "differently" by laying out different coloured carpets for their arrival. The posts suggest former US president Donald Trump and Russian President Vladimir Putin received more favourable welcomes than US President Joe Biden and UK Prime Minister Boris Johnson because they were given red rather than purple carpets. This, however, is misleading. The kingdom changed the colour of its ceremonial carpets from red to lavender in 2021. The posts shared photos of Trump and Putin that predate the carpet policy change.

"This is how Saudi [Arabia] treated their visitors differently," reads the Korean-language claim on South Korean online platform Daum Cafe on July 17.

The claim was accompanied by two images: the first shows former US president Donald Trump walking down a red carpet surrounded by officials wearing keffiyehs, and the second appears to show an airport reception with a purple carpet.

The Korean-language caption of the photos translates to English as: "They [Saudi Arabia] laid out a red carpet to welcome Trump, while they used a purple carpet for Biden." 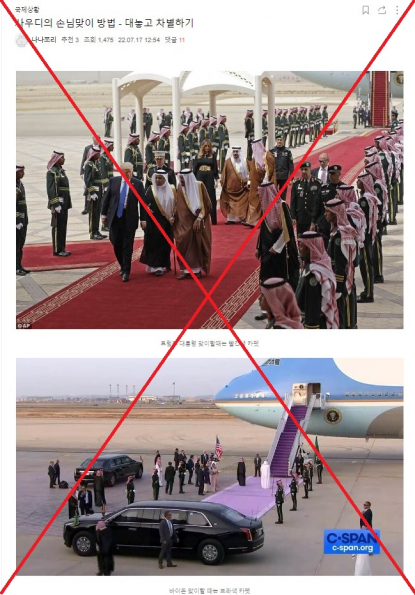 Screenshot of the misleading Daum Cafe post, taken on July 20, 2022

The claim began to circulate online after US President Joe Biden concluded a four-day trip to Israel and Saudi Arabia -- his first trip to the Middle East since taking office.

"The difference between Putin and Johnson," reads the photo's caption.

A screenshot of the misleading photo comparison on Daum Cafe

Identical photos with similar claims have been shared on Facebook here, here, here and here in English.

In May 2021, Saudi Arabia announced it would change the colour of ceremonial carpets from red to lavender.

A statement from its Ministry of Culture reads in part: "Lavender represents a cultural element with important civilizational connotations.

"It converges harmoniously with the Kingdom's deserts and plateaus which, during the Spring, are adorned with the color of lavender and other plants such as Teucrium oliverianum and basil, together forming a natural carpet of purple that reflects the Kingdom's welcoming nature and expresses the equal generosity of the land and its people."

The initiative was also reported by the country's state-run Saudi Press Agency (SPA) and other news outlets in the region, including The National and Al Arabiya.

The photos of Biden and Johnson's respective visits to Saudi Arabia came after the carpet policy change.

Keyword searches on Google found the photo of Biden's visit to the kingdom was a screenshot of this video published by the US broadcaster C-SPAN on July 15, 2022.

The corresponding scene can be seen at the 10-minute 35-second mark.

Below is a screenshot comparison between the photo shared in the misleading posts (left) and the screenshot of the C-SPAN video (right):

A reverse image search on Google found the photo of Trump was published here on the verified Twitter account of the US broadcaster ABC News on May 20, 2017.

The photo's caption, credited to The Associated Press, reads: "POTUS IN SAUDI ARABIA: Donald Trump arrives in the kingdom, marking start of his 1st foreign trip as president".

Trump chose Saudi Arabia as the first stop for his first overseas trip since becoming president.

Below is a screenshot comparison between the photo shared in the misleading post (left) and the photo published by ABC News (right):

Scenes of Trump's 2017 arrival in Saudi Arabia can be seen in other reports, including The Times of Israel and The Guardian.

A Google reverse image search found that the photo of Putin was published here by Al Arabiya on October 14, 2019, also prior to Saudi Arabia's carpet policy change.

The photo's caption, credited to SPA, reads: "It is Putin's first official visit to the Kingdom of Saudi Arabia in 12 years".

Below is a screenshot comparison between the photo shared in the misleading post (left) and the photo published by Al Arabiya (right):

Putin arrived in Riyadh for his visit to Saudi Arabia on October 14, 2019. Scenes of his arrival can be seen in this AFP video published on the same day.

A separate reverse image search on Google found the photo of Johnson was taken after the carpet policy change.

Below is a screenshot comparison of the photo seen in the misleading post (left) and the photo published by Reuters (right):