An image of a liquid bleach bottle has been shared repeatedly in Korean-language posts alongside a claim that applying a bleach solution to the feet can cure athlete's foot. However, the claim is false. Health experts said there is no evidence that bleach can treat fungal infection. They also warned that the liquid could harm the skin and increase the risk of secondary skin infections.

The claim was posted here on Facebook on July 13, 2022, alongside a graphic that shows an image of a bottle of Rox, a liquid bleach manufactured by South Korean chemical company Yuhan-Clorox.

The Korean-language text next to the image reads: "If you dip your feet in Rox once a week for three minutes, then wash them clean with soap, will your feet be free of bad odour, athlete's foot and dead skin? The answer is yes. I've tried it. Athlete's foot and smell in particular disappeared completely." 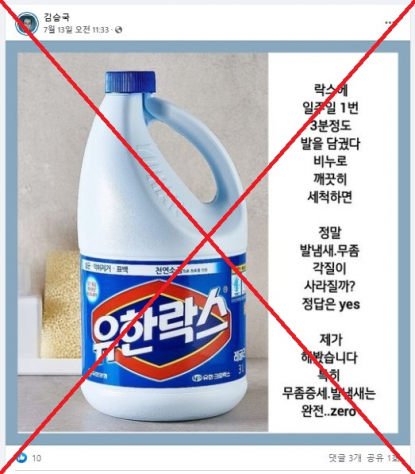 Screenshot of the misleading claim shared on Facebook. Captured July 19, 2022.

Similar claims suggesting bleach can be used to treat athlete's foot were shared here on Facebook, as well as here and here on Naver Blog, a popular social media platform in South Korea.

Athlete's foot is a common fungal infection that usually affects the area between the toes, and is accompanied by symptoms such as itchy white patches, according to the UK's National Health Service.

Experts said there was no evidence that bleach could be used to treat athlete's foot, warning that applying the liquid to the skin could be harmful.

Professor Seo Hyeon-min, a dermatologist at Hanyang University in Seoul, told AFP that "there is no evidence that proves bleach is effective in treating fungal infections like athlete's foot."

"Contact with the liquid in high concentrations can irritate the skin and cause secondary skin infections, so such a home treatment may be highly dangerous," Seo said.

Dr. Nelya Lobkova, a certified podiatrist at Step Up Footcare in New York City, also said using bleach would be an ineffective and dangerous method to treat athlete's foot.

"Soaking the feet in bleach may cause serious skin irritation and chemical burns," she said.

She added applying bleach would dry out the feet and exacerbate athlete's foot and other skin conditions, such as eczema.

The manufacturer's official website lists sodium hypochlorite as the main ingredient in Rox, which Lobkova said was "highly toxic to the skin".

A similar question asking whether it was safe to use Rox on athlete's foot was also posted to Yuhan-Clorox's consumer Q&A website, to which a company representative answered: "Yuhan Rox is not licensed for medical use and thus was not tested in clinical trials."

"Even if someone you know says they have experience using Yuhan Rox solutions to cure athlete's foot, you must not generalise this experience," the entry reads.

"This is because that person's condition may have improved not because of Rox, but due to a third factor which the person may not remember."