A video clip of a woman in a white jacket showing a purported human baby inside a clear liquid-filled plastic bag has been watched more than a million times in social media posts that claim it depicts human cloning technology. This is false: the video shows a Brazilian content creator who told AFP that she was simulating childbirth using a realistic doll -- and it was not a human clone. There is no credible evidence that humans have been successfully cloned.

The Chinese-language caption to the clip translates as: "In the near future, women will no longer have to carry their own baby through pregnancy, babies can be grown in a bag. Are they now allowing cloning procedures to the public? According to whistle-blowers, this technology has been used for many years." 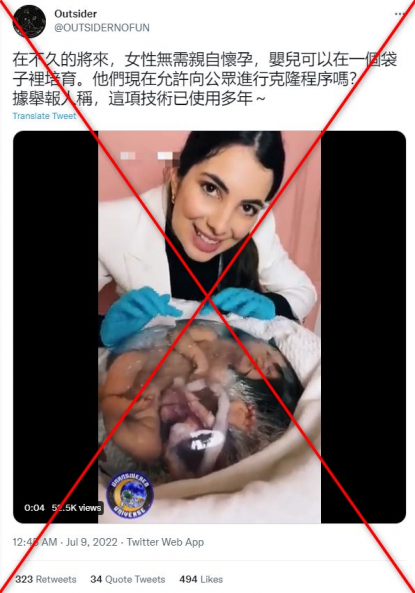 In the clip, an English-speaking male narrator could be heard saying in part: "Check out this new concept. This concept of conceiving kids. Now the mother will no longer have to carry the kid for nine months. Now it can be raised in a bag. How convenient ...

"I would love to tell you this is a new concept, but if you know anything about human cloning, you would know they've been doing this for a long time. Only now is it finding its way to consumers."

"How can the mother have natural maternal love like this?" one wrote in Chinese, and another wrote: "'Science' has destroyed mankind."

"This is horrible! God help us all!" a Facebook user commented in English, while a TikTok user said: "they stopping everything natural but you ain't hear it from me."

Its description states in Portuguese: "ASMR of en caul childbirth you can check the full video in the channel!" then in English: "Birthing a womb reborn baby".

In the genuine clip, the audio features Rossi's voice -- and not the male voiceover making claims about human cloning.

At the start of the video, she says: "Guys, today's ASMR is from an en caul childbirth. Look how cool, a super-realistic baby in the bag."

An en caul birth occurs when a baby is delivered completely inside an intact amniotic sac.

ASMR -- or autonomous sensory meridian response -- has become a full-fledged internet sensation, with content creators like Rossi notching millions of views for clips featuring sounds that can help people feel good and relaxed.

Rossi, who calls herself "ASMRtist", also published the same video on her verified TikTok and Instagram accounts on the same day.

Below is a screenshot comparison of the video in the misleading post (left) and the genuine YouTube video (right): 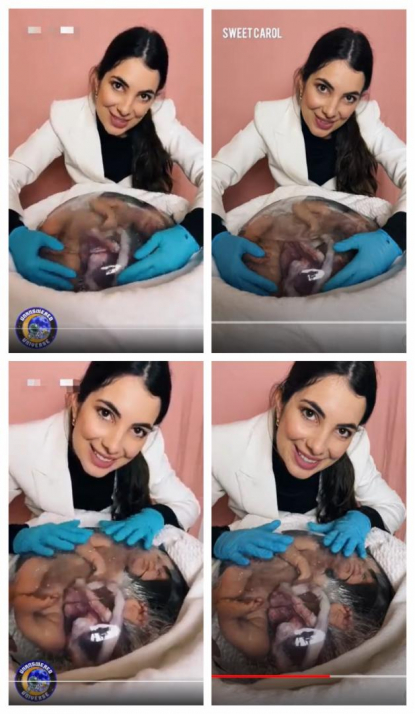 When contacted by AFP, Rossi said on July 20, 2022: "This video was intended to simulate an ASMR role-play of normal birth."

"This is not a human clone, it's a realistic doll," she added. "I bought it at a doll maternity store here in Brazil."

No human cloning technology to date

Multiple keyword searches on Google did not find reports that scientists had successfully cloned a human to date.

"From a technical perspective, cloning humans and other primates is more difficult than in other mammals," it states.

"There currently is no solid scientific evidence that anyone has cloned human embryos."