Microbursts are localised columns of sinking air that form inside thunderstorms. 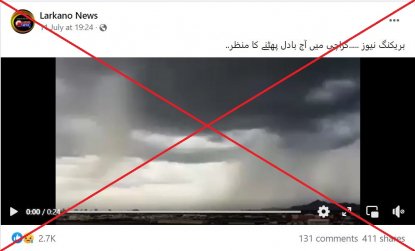 AFP published photos of Karachi commuters wading through floodwaters here and here on the same day.

Pakistan's monsoon season -- which typically lasts from June to September -- has killed more than 180 people across the country this year as downpours continue to threaten poorly built homes and damage infrastructure.

A reverse image search, followed by a keyword search, found the same video was posted here on the YouTube channel of US-based photographer Kyle Benne on July 21, 2019.

Benne confirmed to AFP he filmed the video in Phoenix in 2018.

Below is a screenshot comparison between the video in the misleading post (left) and the genuine YouTube video (right):

It is titled: "Microburst over Phoenix, Arizona".

According to the description, the photo was also taken on August 23, 2018.

AFP has debunked other misinformation related to the monsoon in Pakistan this year here and here.